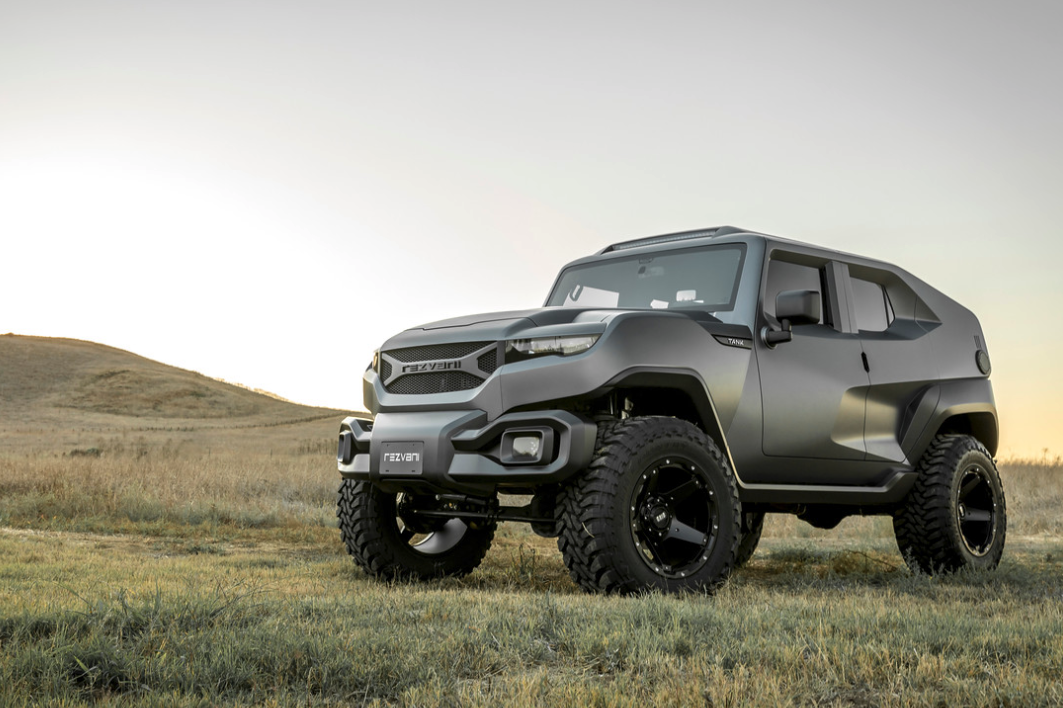 Rezvani isn’t a carmaker, at least not in the traditional sense, choosing to produce highly modified and customized versions of existing vehicle platforms rather than start from scratch, but that doesn’t make its newest creation, a 500-horsepower “tactical” SUV called simply the Tank, any less impressive.

The Rezvani Tank looks like something you’d expect to see on the war-torn streets of a global hotspot, but this incredibly powerful vehicle is built with your suburban commute in mind. That said, it’s also just as tough as it looks, boasting optional ballistic armor and even a thermal night vision system, just in case the drive home from work becomes apocalyptic.

The Tank began its life as a Jeep Wrangler, but you’d hardly know it from looking at it. Under the hood, a 500-horsepower, 6.4-liter V8 provides sourced from Fiat-Chrysler’s SRT performance division provides the muscle, and a military-inspired custom body sits atop a higher-than-normal suspension.

But it’s the optional add-ons that really push the Tank into the realm of absurdity. Along with the aforementioned kevlar vehicle armor and thermal night vision, the Tank can also be outfitted with military-grade run-flat tires, kevlar-bolstered gas tank, radiator, and underbody panels, as well as bulletproof glass. You can also upgrade to a heads-up display if the traditional dashboard just isn’t cool enough for you.

It’s an incredibly capable vehicle that, if we’re being honest, has absolutely no business cruising along the boulevards of Anytown, USA. Then again, buying one is ridiculous in the same way as throwing down hundreds of thousands of dollars on a supercar capable of breakneck speeds only to leave it in the garage and take it for Sunday drives to Starbucks. If buying an SUV that can traverse a warzone appeals to you, who am I to judge?

Of course, all these insane features come with a lofty price, and you’ll need to plunk down a minimum of $178,000 for the privilege of sticking a Tank in your driveway, and if you want the fully trick-out model, expect to pay quite a bit more.