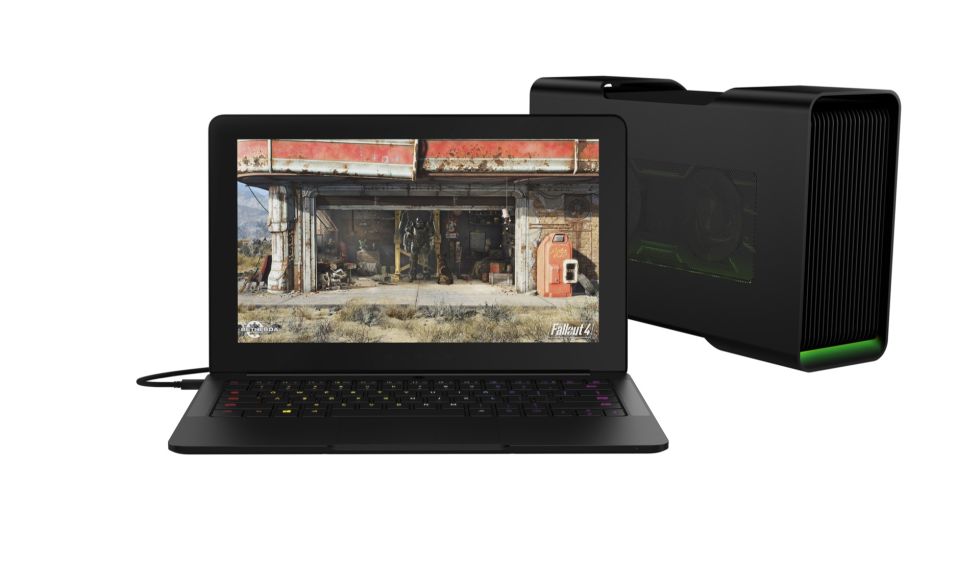 Remember these three words, PC gamers: Blade Stealth and Core. Razer announced at CES 2016 the kind of product many PC gamers may have been waiting for, a powerful and ultraportable laptop that can be transformed into a fantastic gaming rig once the work day is over. It accomplishes the feat with help of a clever accessory.

Picture this: you unplug the Blade Stealth in the morning and head on to work, using the machine as your dedicated Windows 10 work laptop. But when you get back home, you simply connect it to its Core and get on with your PC gaming session. At least that’s what Razer seems to promise, a new kind of gaming laptop that should satisfy the needs of modern gamers who aren’t using Xbox or PlayStation to get their gaming fixes.

The brilliant piece of equipment here is the Core, which is a Thunderbolt 3 dock that can fit a full-size dual-slot PCI Express graphics card. The dock powers the Blade Stealth laptop over USB-C and has four additional USB 3.0 ports as well as an Ethernet port. The Core has a 500W power supply and can house high-end dual-GPUs that can consume up to 375W of power, Ars Technica explains. Obviously, you’ll be able to upgrade your graphics card as often as you’d like.

Once plugged in, the Core will use the high-speed Thunderbolt 3 interface to pump out insane graphics to an external monitor, or to the laptop’s display.

The Core should be available in the first half of 2016, but pricing for it has not been announced. Razer says the Core could work with other laptops that have Thunderbolt 3 support, though that’s up to OEMs or users to figure out, and it can house “virtually every popular desktop graphics card from AMD and Nvidia.”

We won’t ignore the ultrabook part in this new Blade Stealth and Core setup. Razer’s new laptop isn’t a gaming machine on its own but it’s still impressive when it comes to specs.

The ultrabook is 0.52 inches thick and weighs 2.75 pounds. One feature that also stands out is the backlit keyboard that has user-customizable RGB LEDs so that you can personalize the colors of your keys.

The cheapest Blade Stealth will cost $999 in January when it launches, and will pack a 128GB SSD in addition to that 2K display. The 4K model has 512GB of storage and costs $1,599.