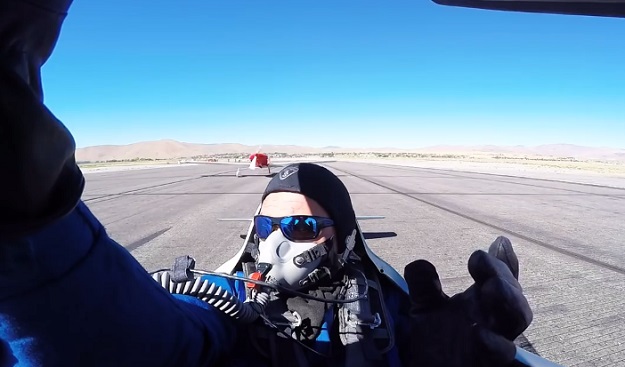 Hold on to your hats folks, because the video you’re about to see is positively insane. At the National Championship Air Races in Reno, Nevada this past Sunday – an event where planes race each other thousands of feet up in the air – pilot Thom Richard noticed that something was amiss with his engine while on the runway.

Following protocol, Richard signaled that something was wrong with his plane, killed the engine, and opened up his canopy. Now normally, all of the other pilots on the runway should have been made aware of the situation so that they could keep their planes at bay and let Richard get out of harms way. Unfortunately, not all the planes on the runway received the  message. Before you know it, a plane was speeding down the runway, barreling towards Richard who at this point was effectively helpless.

What happened next is truly incredible. With Richard’s entire torso and head exposed, the left wing of the oncoming plane barely clipped Richard’s hand and miraculously just managed to miss ramming into the back of his skull, an impact that could have very well killed him instantly. Both planes involved in the incident were wrecked but there were thankfully no serious injuries.

“It’ll be several months before we figure out what to do with [the damaged plane],” Richard said. “I’m not the slightest bit upset over the accident. I, in fact, consider myself a very lucky man. Another four feet to the left and I would have been minced meat. Literally dodging a bullet. A busted up hand is a small price to pay. I’ll take it. It’ll heal. Though it is difficult to type one-handed.”

Video of the harrowing incident can be viewed below.

“We were number four on the starting grid, which was the middle inside position with three aircraft on the front row, one to our right and three behind. Upon running the engine up in anticipation of the start, about 20 seconds before the green flag drop, the engine was not running well enough for flight, as you can hear from the audio, never mind racing. I made the decision to shut the engine down to signal the starters to halt the starting process. The flagman on my row put his hands in an ‘X’ over his head, as our procedures prescribe, and I opened my canopy to make it clear I was out of the race and so everyone could see me. The alternate airplane was signaled to taxi on to the runway to replace my entry. I felt confident the communications had reached the appropriate people and waited for personnel to push me off the runway.

“However, much to my surprise, I saw the flagman run out on to the runway waving his hands over his head as if something was wrong. The aircraft to my right started rolling and a few seconds later the number six and eight aircraft flew by me on either side. All I could do at that point was hope the number seven (center) aircraft would clear me on the centerline to my right.

“The impact was violent and loud. His left leading edge shaved off the top several inches from my vertical and skimmed the turtle-deck without touching until it impacted my right hand holding up the canopy, at well over sixty miles an hour. The left landing gear hit the top of the gull-wing center-section, blowing a hole in the top skin and impacted the rear face of the front spar so hard that it broke the landing gear clean off his airplane. The propeller sliced three evenly spaced gashes about mid span of my right wing, about a foot apart. The right landing gear sheared the wing off just short of the right wingtip. The impact spun me around nearly 180º, like a teacup ride at warp eight. The other aircraft came to rest several hundred feet in front of me with a folded gear, damaged wing and sheared propeller facing the other way as well. That pilot received no injuries.”