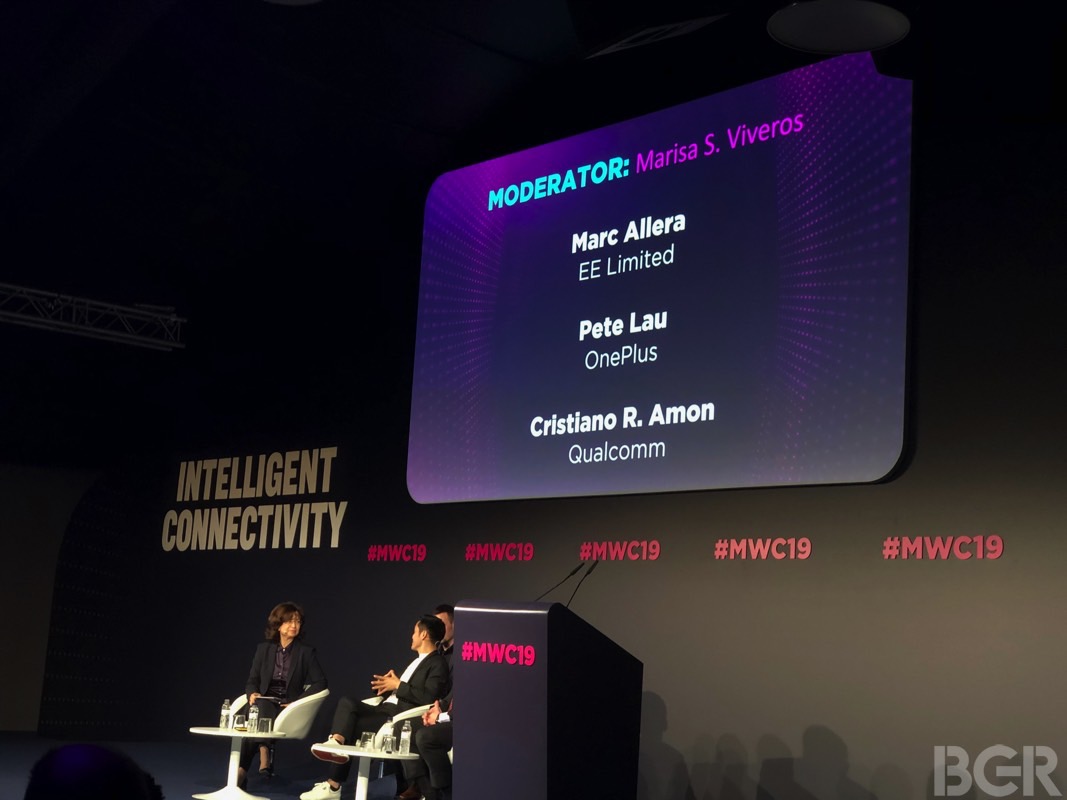 OnePlus has challenged traditional smartphone makers for a few years now, evolving from a startup that surprised the world with affordable flagships to a more mature company that seems ready to lead the 5G charge. The first OnePlus 5G phone was shown yesterday to the world at Mobile World Congress, as OnePlus demoed cloud gaming on 5G phones. The company followed on Tuesday with a new announcement, revealing to the world its vision for the long-term evolution of 5G, as well as its near-term plans during a panel about the 5G devices.

OnePlus CEO Pete Lau, joined by Qualcomm’ Cristiano Amon and EE’s Mark Allera, explained what comes next in this journey to 5G. Each of the three execs talked about the imminent arrival of 5G and stressed the fact that smartphone vendors, component manufacturers, and carriers have been working together to make this happen. In this case, we’re looking at OnePlus, Qualcomm, and EE.

The first OnePlus 5G phone will arrive in the next quarter in the UK, where EE will sell it, but the device will be available in other markets as well. Allera explained that EE would cover 16 of its busiest cities and locations this spring, which account for 30% of the current traffic.

Lau also unveiled a different OnePlus 5G initiative, the “5G Apps of Tomorrow program” that will allow interested participants to register to try out the first OnePlus 5G phone. You have exactly one month to enter, until March 26th. The winners will then be selected by a panel including the CEOs of OnePlus, EE, and executives from Qualcomm. Five winners will get to visit OnePlus in China, as well as try out the first OnePlus 5G phone and get access to EE’s 5G network. The full terms and conditions are available at this link.

Lau didn’t reveal any details about the first OnePlus 5G phone, so we still have no idea what it’ll be called or what it’ll be able to do. It’s also unclear whether the phone will precede the OnePlus 7, or whether the OnePlus 7 will have a 5G version for certain markets. OnePlus has launched two flagship phones a year for a few years now, including a new generation in the spring and a “T” update in late fall or winter. 2019 might be the first year OnePlus launches three flagships, although we’re only speculating at this point. What we do know is that the OnePlus 5G phone is powered by the Snapdragon 855 mobile platform, which includes the chipmaker’s 5G modem. But that’s something that was confirmed months ago. For the time being, this is all we can see of the OnePlus 5G phone:

Lau did provide some insight into what the company’s vision for the 5G future might be, however. He said he expects 5G to “fundamentally transform our lives in the next 10 years,” as we get to experience the different phases of 5G evolution that will include increases in speed, smarter AI and digital assistants, as well as a boom for the internet of things.

Answering questions about what 5G will mean for the consumer and how the new standard will change our mobile experience, Lau said that specs won’t matter as much on phones in the future. Users won’t need to concern themselves with memory or storage once 5G coverage is widely available, he said, because a faster and more accessible cloud will provide “immediate cloud storage.” Lau also said he expects a “total change” for your photography experience on a 5G phone.