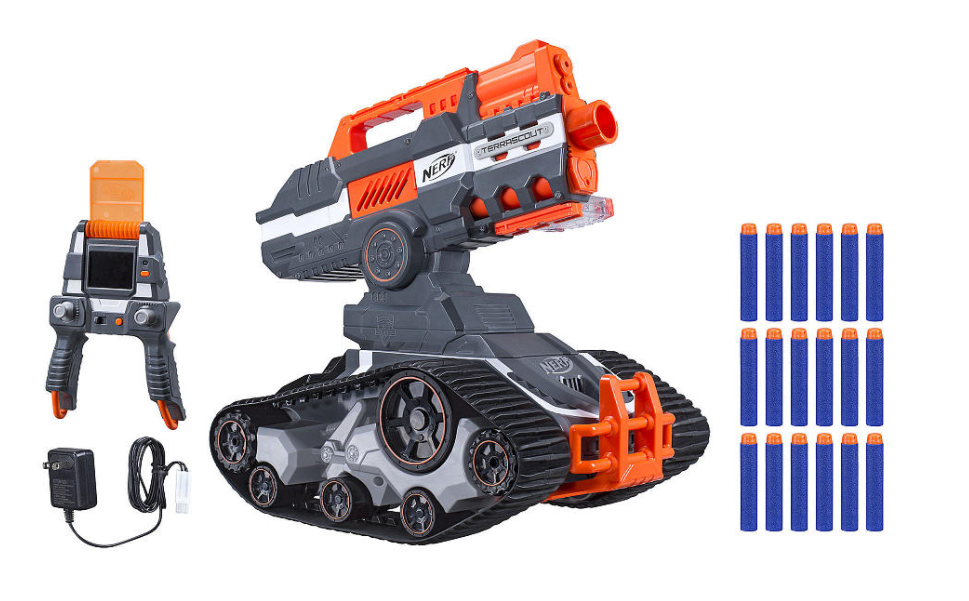 It seems like every year around this time, Nerf reminds everyone why it still exists and launches a new wave of amazing and moderately safe weapons of war. This year, the veteran toy company is rolling out the big guns with an actual tank.

The Nerf N-Strike Elite Terrascout Remote Control Drone Blaster is big in name but small in size. At just over two feet high, and weighing it at over 10lbs, it’s bigger than most radio controlled vehicles, yet still small enough to traverse your hallways and patrol the living room, but it’s the drone’s technological muscle that will really impress.

MUST SEE: Act fast: Newegg has 32 pre-Black Friday deals that expire at midnight

When fully stocked, the drone carries an 18-dart clip that auto-feeds the cannon with fresh ammo, and can be fired in either semi-automatic or fully automatic modes. Its treads allow the tank to turn a full 360 degrees on its own footprint, and with a fresh battery it can speed along at an impressive 3.6 feet per second.

The drone is operated via a handheld controller, and comes complete with an LCD screen and live video feed via a built-in camera on the tank’s chassis. There’s even an SD card slot so you can record the mayhem via photos or video.

To be totally fair, calling this little beast a “drone” is a bit of a stretch. In common parlance, labeling something a drone typically implies some degree of autonomy, and you won’t find any of that here. That being said, as far as remote-controlled vehicles go, this thing seems like a riot.

The Nerf N-Strike Drone Blaster will hit your wallet almost as hard as it’ll scare your cat, with an MSRP of $199.99 — though it’s currently on sale for $189.99. It’s also a Toys R’ Us exclusive, which means you might have to elbow some fellow shoppers in order to get your hands on one.