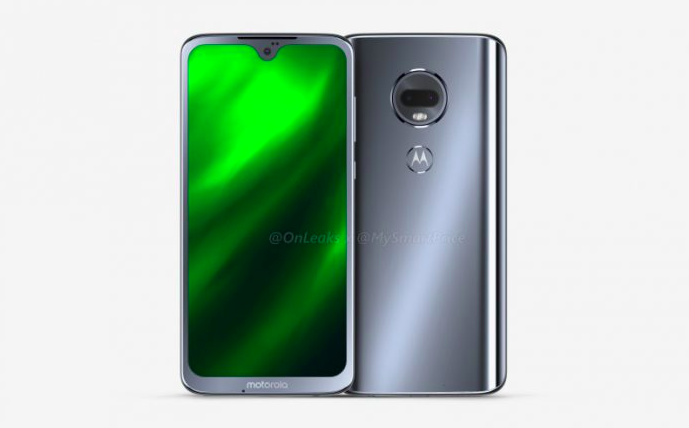 Thanks to some leaked renders out today, we’re getting a first look at what Motorola has in store for the next addition to its smartphone G-series — the Moto G7, which will debut along with a larger “Plus” model early next year.

A partnership between MySmartPrice and @OnLeaks has produced some leaked images that show off, among other things, a waterdrop-style notch at the top of the phone — one obvious point of difference between it and the previous G6. “Since the Moto G7 will be a budget smartphone,” MySmartPrice goes on to note, “it still has a significant chin at the bottom, with the Motorola branding on it. At the rear, the Moto G7 appears to feature a 3D curved glass back similar to the one seen on the Moto X4. We also see two camera sensors and a dual-LED flash housed inside the circular module at the rear.

“Below the circular module is a fingerprint sensor embedded inside the Motorola logo. At the bottom, we find a 3.5mm headphone jack, a USB Type-C port, and a speaker grille.”

The right side of the handset, meanwhile, sports power and volume control keys, and when you include the camera bump the handset will apparently have a thickness of 9.5mm. The site also says it’s confirmed the display will measure about 6 inches diagonally.

According to spec details that have leaked, MySmartPrice is also expecting the handset to come with 4GB of RAM and 64GB of internal storage. There will be 16MP + 5MP dual cameras in the back and a 12MP front-facing camera, along with a 3500mAh battery. 9to5Google rounds things out with a bit more detail, adding that other rumored specifications include an octa-core processor but no word on whether the storage will be an expandable via microSD card.

“Charging should be quick,” the site notes, “with the addition of a USB Type-C charge port. The 3.5mm headphone jack also remains intact at the bottom of the device. The Moto G7 will likely ship with Android 9.0 Pie right out of the box for smooth daily performance.”

Motorola, of course, launched its Moto G-series smartphone line back in 2013, and the combination of hardware running almost stock Android turned the Moto G into a bestseller. Follow-ups haven’t been met with as strong of a response, however, and it’s against that backdrop that we’ll soon see the Moto G7 and G7 Plus enter the fray.