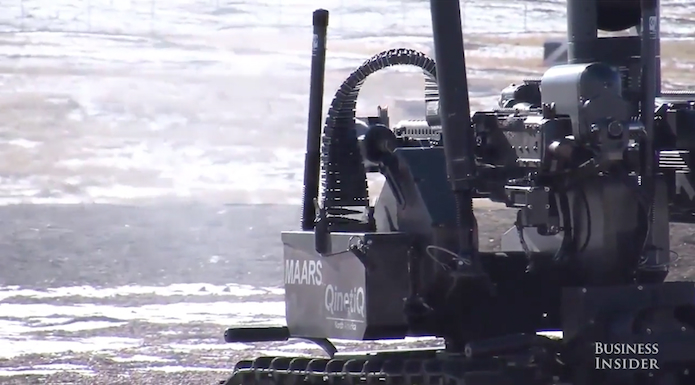 We’ve seen all sorts of weapons mounted on drones, and military drones already wield impressive firepower, but that doesn’t mean we’re done building crazy machines with fire power. The next step is adding heavy machine guns and even grenade launchers to robots. Thankfully, these are not robots powered by artificial intelligence. Just like drones, they’re piloted by soldiers — the robots only do the heavy lifting and stabilize fire.

Detailed in a Business Insider video, the Maars (Modular Advanced Armed Robotic System) is the military’s machine gun-toting robot. The robot is like a mini-tank with a remote control. It can travel at a top speed of 7 mph, which means it’ll walk alongside marines on a mission, and its battery is good for 8 to 12 hours.

When equipped with a M240 machine gun, the Maars can carry some 400 rounds in addition to the weapon itself. But it can also be used to drag wounded Marines off the battlefield if need be.

A tactical robot controller is needed to operate the Maars and fire the weapon, and the same device can be used for drones or other devices. The robot has cameras and sensors that transmit information to the controller, which may also make it a valuable weaponized scout.

The Maars is not alone. A bigger version of the robot exists, the RVM/CART, which can carry a massive M134 minigun — a weapon capable of firing between 2,000 and 3,000 rounds per minute.

Business Insider’s video is available at the source link, while a longer YouTube video showing the Maars in action follows below.