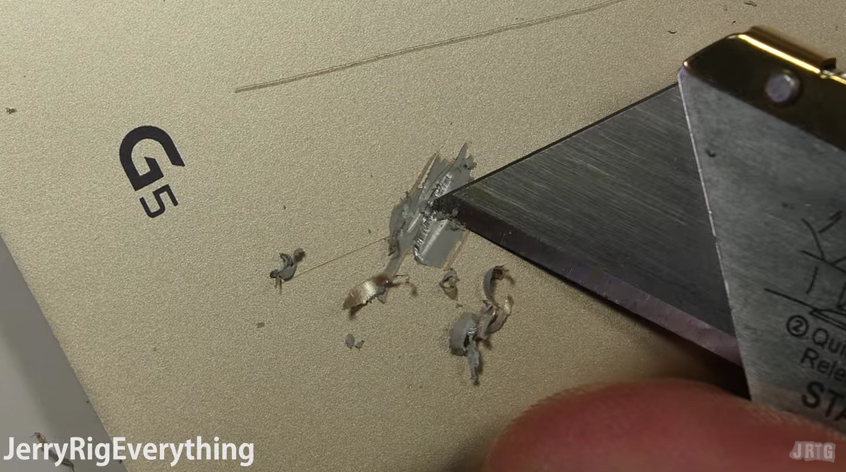 The LG G5 is being billed as a premium smartphone but its metal rear casing seems to be vulnerable to scratching. YouTube channel JerryRigEverything, which showed us last year how easy it is to bend the Nexus 6P, put the LG G5 through the same standard durability tests other handsets were subjected to before it. It seems that even though the G5 has a metal rear shell, it’s covered by a primer that is fairly easy to scratch.

As you can see, the rear case of the phone scratches beyond what we’d like to see, and the metal case is covered in what appeared to be a layer of plastic. It’s not plastic, as LG explained.

The structural integrity of the phone isn’t in peril, however, and a second video from the same site shows the LG G5 resisting bending attempts – the bottom access point that turns the handset into a modular phone is susceptible to damage that way. However, it’s the scratch test that’s rather disconcerting.

LG is apparently aware of this issue and released a response to address the matter. In short, the company says that the handset is covered by primer which binds paint to aluminum. Here’s the full statement:

What you’re seeing there is primer, not a plastic cover. As you know, primer is used to get paint to bond to aluminum, which is what we used for the G5’s body. The aluminum alloy we sourced is known as LM201b (patent pending) and was developed at the Korea Institute of Industrial Technology for use in automobiles and aircraft. LM201b, unlike the aluminum used in other smartphones, is diecast unibody which makes it very sturdy while still maintaining lightweight properties.

We figured out a way to integrate the antenna bands into the aluminum seamlessly so you can’t feel the lines and covered the LM201b with primer and paint using a process called microdizing which means that tiny particles of metal are infused in the coating and bonded to the aluminum. I think it’s incorrect to say that a product isn’t all metal if paint is involved. That’s like saying cars and airplanes aren’t metal because they’re also painted. For the record, even metal that’s anodized will scratch off. Our process may be different, but it achieved what we were aiming for, which is a smooth, seamless metal finish that’s durable and lightweight. We weren’t interested in doing what has already been done. When did this become a bad thing?