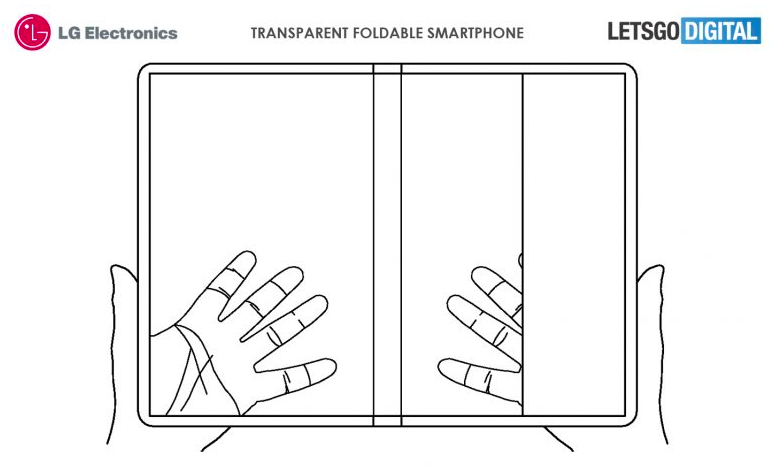 It was probably inevitable that we’d eventually see a smartphone design that combines transparent screens with a foldable form factor. LG has just patented a design for such a handset this week, following its experimentation with see-through displays over the last few years — and then showing off a partly transparent OLED TV at CES a few months ago.

Sony, meanwhile, has also been thinking along these same lines in terms of smartphones, patenting a design for a transparent handset at the end of 2018. And then on Tuesday, the US Patent and Trademark Office published the LG patent (which you can see here) for its own version of that same idea — a smartphone that’s transparent, but also foldable.

The patent was actually filed more than three years ago, and its publication this week was spotted by Dutch tech news blog LetsGoDigital. So what does this most unusual of an already unusual smartphone design consist of? Well, the patent describes a handset that’s mostly a flexible screen, on both the front and back. When it’s “closed,” the size is comparable to a normal smartphone, and when it unfolds you can see extremely narrow screen edges, with the whole thing opening to the size of a tablet a la something like Samsung’s Galaxy Fold.

We’ve certainly covered a slew of foldable phones and proposed designs for such handsets over the last several months, with the foldables encompassing everything from gaming phones to “phones” that bend around your wrist, as well as phones that “open” like a book. Most of the major smartphone manufacturers are testing the waters here, with big companies like Samsung and Huawei dedicating major investment and resources to producing premium devices that also happen to fold.

LG’s design, meanwhile, manages to be a radical departure from most of what everybody else is doing. And let’s not forget, LG is also experimenting with a more straightforward foldable smartphone concept (assuming we can even call certain foldables “straightforward” at this point).

To be sure, a device of this kind is by no means guaranteed, as there are still no doubt major technical hurdles that have to be dealt with when it comes to transparent displays that bend. LG seems to have also tried to go out of its way to make this design as technically complicated as it can. As envisioned, for example, this phone would have touch input via both the front and back — in other words, no matter how you hold the phone. The patent also includes a description for a rear camera system with multiple lenses.

Maybe LG will move forward with a foldable handset design at some point, and maybe not. At a minimum, at least we can say designs like these are proof that companies are increasingly thinking outside the box and trying hard to push the smartphone market forward — whether we’re ready or not.