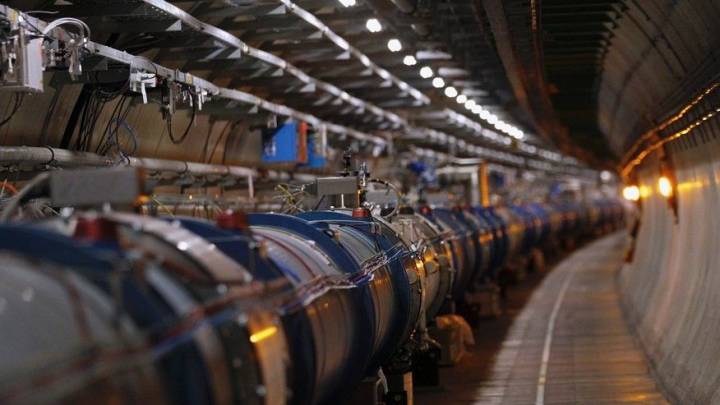 Are we about to enter a new era of physics?  Data collected by the Large Hadron Collider in Switzerland may have identified particle activity that doesn’t fit the standard laws of physics.

The analysis by scientists including physicists at the Institute of Nuclear Physics at the Polish Academy of Sciences (IFJ PAN) could have huge scientific implications.

“There are some indications that physicists working at the LHC accelerator at the European Organization for Nuclear Research (CERN) near Geneva may see the first traces of physics beyond the current theory which describes the structure of matter,” said the IFJ PAN, in a recent press release.

The structure of matter is described by a theoretical framework called The Standard Model, which identifies the roles played by different particles. Boson particles, for example, are carriers of forces, whereas photons are related to electromagnetic interactions. Matter is formed by particles called fermions.

However, scientists, analyzing data collected by the LHCb experiment in 2011 and 2012, noticed an anomaly in the decay of a particle called a B Meson. According to the research, the traditional method for determining the particle’s decay may lead to false results.

Could the anomaly hint at a new understanding of the Universe? Scientists are certainly intrigued by the anomaly. “To put it in terms of the cinema, where we once only had a few leaked scenes from an much-anticipated blockbuster, the LHC has finally treated fans to the first real trailer,” said Professor Mariusz Witek of IFJ PAN, in the release.

Witek notes that the framework used to describe the structure of matter poses plenty of questions for scientists. “The Standard Model cannot explain all the features of the Universe,” he said. “It doesn’t predict the masses of particles or tell us why fermions are organized in three families. How did the dominance of matter over antimatter in the universe come about? What is dark matter? Those questions remain unanswered.”

To further illustrate his point, the Professor notes that gravity isn’t even included in the Standard Model.

However, scientists caution that more research is needed on the B Meson anomaly. “We can’t call it a discovery. Not yet,” said the IFJ PAN.

CERN spokesman Arnaud Marsollier told FoxNews.com that the B Meson data, which first emerged last year, are not conclusive. “More data are needed before we can tell anything significant on this, so we will have to wait for the LHC to restart (soon),” he explained via email, noting the importance of patience when recording and analyzing data. “Science needs time!” he added.

CERN is currently starting powering tests on the huge particle accelerator. “Beams should be back by the end of the month or early April, and collisions sometimes next month if everything goes as planned,” said Marsollier.

Oxford University Physics Professor Guy Wilkinson, who serves as the spokesman for the LHCb experiment, told FoxNews.com that CERN’s B Meson data is “extremely interesting,” but noted that it could be a couple of years before scientists perform a full analysis. “When we analyse this new sample in a year or two we will be able to make a fresh and, I hope, more categorical statement on this topic,” he explained, via email.

The 17-mile LHC was built between 1998 and 2008 to help scientists test some theories of particle and high-energy physics and advance understanding of physical laws.

In 2012 the Collider won global acclaim with the discovery of the long-sought Higgs boson  particle, which explains the behavior of other particles. Physicists Peter Higgs and Francois Englert were subsequently awarded the 2013 Nobel Prize in Physics.