Apple’s forthcoming iPhone 8 will, at long last, introduce a major new redesign to a form factor that has essentially remained unchanged since the introduction of the iPhone 6 back in 2014. And while there’s certainly nothing wrong with the current iPhone design, there’s no denying that many iPhone owners have been yearning for a revamped and fresh new design for years.

As it stands now, the overall look and feel of Apple’s upcoming iPhone 8 is all but a sure thing. Based on a number of credible rumors — not to mention illustrations unearthed from the HomePod firmware Apple accidentally released a few weeks ago — the iPhone 8 will feature an edgeless OLED display with a distinct notch at the top that will house a suite of advanced 3D sensors and cameras.

As the mockups below illustrate, the iPhone 8 design will includes two flaps — which Apple reportedly calls “ears” — that flank the aforementioned camera sensors. That said, there has been ongoing debate over the past few months as to whether or not Apple would try and hide the ears in an effort to maintain a clean interface or if the ears would be pronounced.

Well, according to a new report from Bloomberg’s Mark Gurman — who tends to have a solid track record regarding iPhone rumors — the ears above will take on the color of whatever app happens to be running, assuming that’s what developers want.

“Apple has opted to not hide the notch area at the top of the screen,” Gurman writes, “showing a definitive cutout at the top of apps with non-black backgrounds.”

With this information in tow, designers were quick to throw together mockups which provide us with our most accurate look yet at what Apple’s iPhone 8 is going to look like.

As a quick example, here’s a mockup put together by designer Olivier Charavel.

And here’s one more for good measure.

Based on this @markgurman report, it sounds like the new 'iPhone 8' app UI will look something like this (with mockup help from @charavel) pic.twitter.com/WdZcu9CpJk

All in all, I’m not sure if there is any benefit to Apple making the “ears” so conspicuous. If anything, it seems that the entire look and feel of iOS 11 on the iPhone 8 would look a lot more seamless if Apple simply made it black, a’la the images below courtesy of Maksim Petriv. 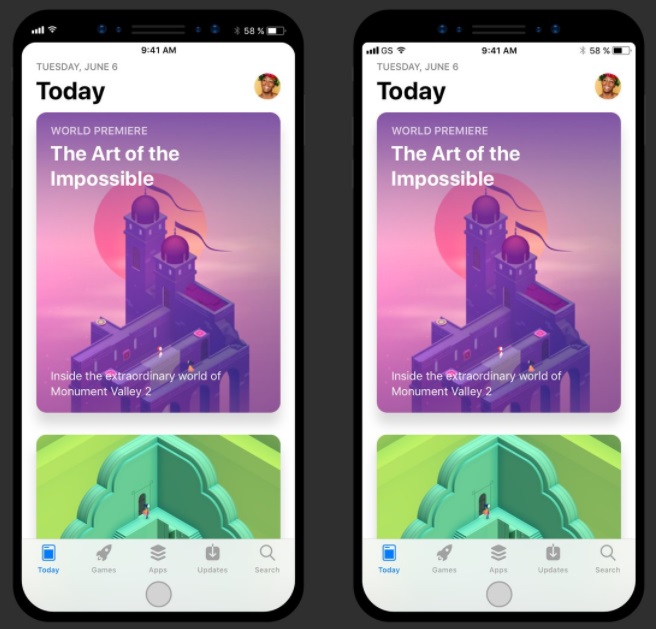