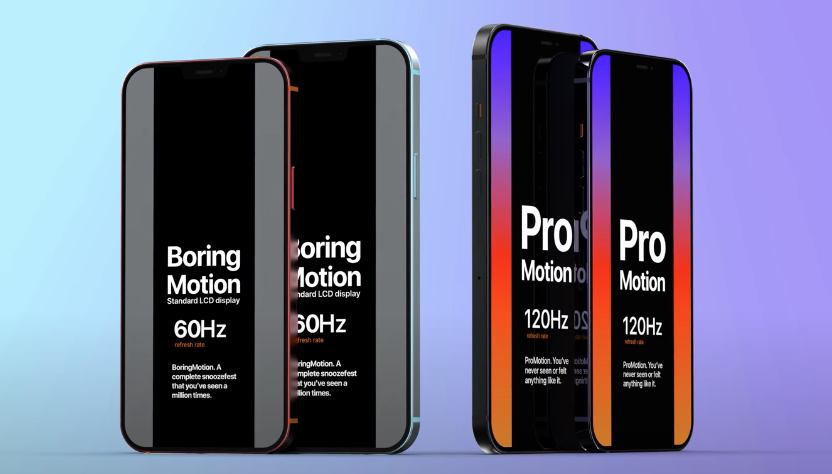 Whenever Apple introduces a new technology, it typically appears on the iPhone before making its way over to the iPad. Apple’s 120Hz ProMotion display, however, has long been a glaring exception to the rule. Originally introduced as a feature on Apple’s iPad Pro models, a new video from the EverythingApple Pro YouTube channel reveals that the advanced display technology will finally be coming to the iPhone with the release of the iPhone 12 later this year.

The displays on Apple’s iPhone 11 boast a 60Hz refresh rate, so the updated iPhone 12 display should allow for improved responsiveness, more fluid scrolling, and “smoother motion content.” The leak also claims that the iPhone 12 Pro models will incorporate dynamic variable refresh switching which will alternate between 60Hz and 120Hz depending on the use-case environment.

The 120Hz ProMotion display will likely be exclusive to 6.1-inch and 6.7-inch iPhone 12 Pro models while the lower-end 6.1-inch and 5.4-inch models will keep the 60Hz refresh rate found on current iPhones. Further, all iPhone 12 models will boast OLED displays, which is worth noting given that the entry-level iPhone 11 last year shipped with an LCD display.

The video also reveals that the battery capacity on the iPhone 12 Pro models will be 4,400 mAh to support the higher refresh rate and, of course, the inclusion of a 5G chipset. In contrast, the iPhone 11 Pro battery has a capacity of 3,046 mAh.

As for other iPhone 12 features, the video cites Max Weinbach who reveals that the notch on the iPhone 12 will be distinctly smaller than on previous models. What’s more, Face ID on the iPhone 12 will incorporate a wider angle of use which should make it that much easier to unlock your device from a variety of different angles.

Of particular interest is the claim that the iPhone 12’s ability to take crisp and vibrant photos in low light settings will be distinctly better than what’s currently available on the iPhone 11. Given that the low light photography on the iPhone 11 is nothing short of incredible, we’re certainly intrigued to see what camera improvements Apple brings to the table with the iPhone 12.

Size-wise, a previous report on the iPhone 12 release indicated that the next-gen iPhone 12 Pro Max will be slightly taller and wider than the iPhone 11 Pro Max. It will also have smaller bezels compared to its predecessor.

Some other iPhone 12 tidbits include the following: Navy Blue will be replacing Midnight Green and the iPhone 12 will not include a Smart Connector.

All that said, the flagship feature of the iPhone 12 will be its support of 5G. Whether or not that helps drive iPhone sales remains to be seen, especially in light of the economic impact caused by the coronavirus pandemic.

On a related note, the iPhone 12 release schedule is still up in the air. Though iPhone releases typically go down in September, the coronavirus has partially delayed the development process and we’ve seen reports indicating that the iPhone 12 release may be pushed back to October or November.