Recent data from Mixpanel reveals that 38.45% of all iOS users are already running iOS 11. That’s not too shabby for an iOS update that went live just two weeks ago, especially when you consider that iOS 11 isn’t exactly a groundbreaking or must-have update. While iOS users haven’t adopted iOS 11 as quickly as they took to iOS 10, the overarching takeaway is that iPhone users are far more likely to be running the latest version of iOS than Android users are likely to be running the latest version of Android. Bringing this up may seem like a quick and easy way to poke fun at Android, but the benefits or running the most up to date version of a mobile OS — no matter the platform — can’t be overstated. New features notwithstanding, running an antiquated mobile OS typically leaves users more prone to serious security threats.

So how bad is it over on the Android side of the equation? Well, to be blunt, it’s pretty bad. Taking a look at Android’s developer dashboard, we see that not any single version of Android has amassed the 38.45% share iOS 11 already enjoys. What’s more, nearly half of all Android devices are currently running Android Lollipop or an even older version of Android. For some context, the initial Lollipop update went live all the way back in late 2014. Put differently, nearly half of all Android devices are running OS’ that, at the very least, are about as old as iOS 8. That’s dumbfounding. 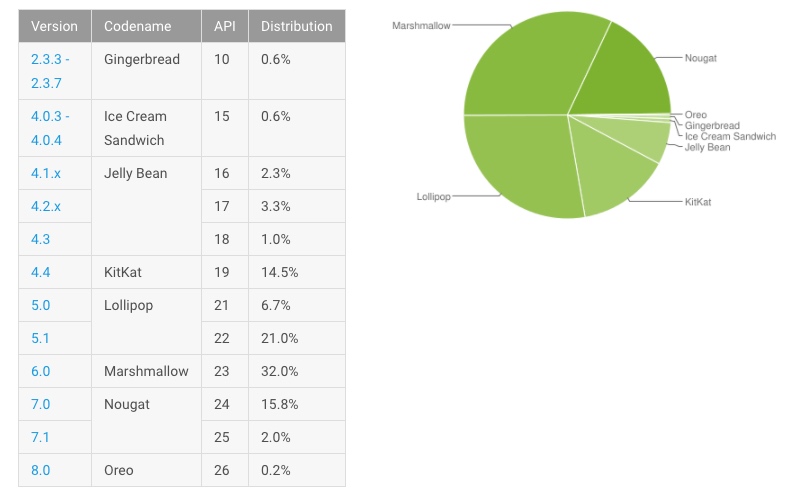 Google has certainly done a decent job of increasing adoption of its more recent mobile OS offerings in recent years, but the search giant still has a lot of work to do if it ever wants to come close to reaching the level of iOS adoption Apple enjoys. So while Google understandably likes to boast about the ever-increasing number of Android handsets in-use, it’s important to keep in mind that many current Android users remain unable to take advantage of the best features Android brings to the table.