Apple earlier today rolled out iOS 11, a gigantic new software update for iPhone and iPad users. As is to be expected, iOS 11 is chock-full of interesting new features, including a complete rethinking of the iPad user experience, the ability to send money to friends and family via Apple Pay, welcome updates to the Live Photos feature, a redesigned App Store, support for ARKit developed apps and much more.

What’s more, the iOS 11 update, as most iOS updates tend to do, also introduces a number of subtle yet noticeable user interface tweaks. While most users may not care or perhaps even notice these changes, they’ll probably be hard to ignore for most seasoned iOS users. Predictably, the UI changes implemented by Apple in iOS 11 haven’t all been well-received. To this point, designer Ryan Lau recently penned a lengthy piece on the iOS 11 design and his take on Apple’s latest software update is far from flattering.

Calling the iOS 11 design “unfinished”, Lau provides a number of examples to help bolster his claim that the iOS user experience can, at times, feel inconsistent and muddled. Admittedly, some of the examples raised by Lau seem incredibly nit-picky, but if you’re into design, you’ll certainly find it to be an engaging and interesting read.

As a quick example, Lau draws our attention to the Apple ID section found within the Settings app. As illustrated below, Lau notes that the “alignment of devices” in iOS 11 is “completely off” from the rest of the section. 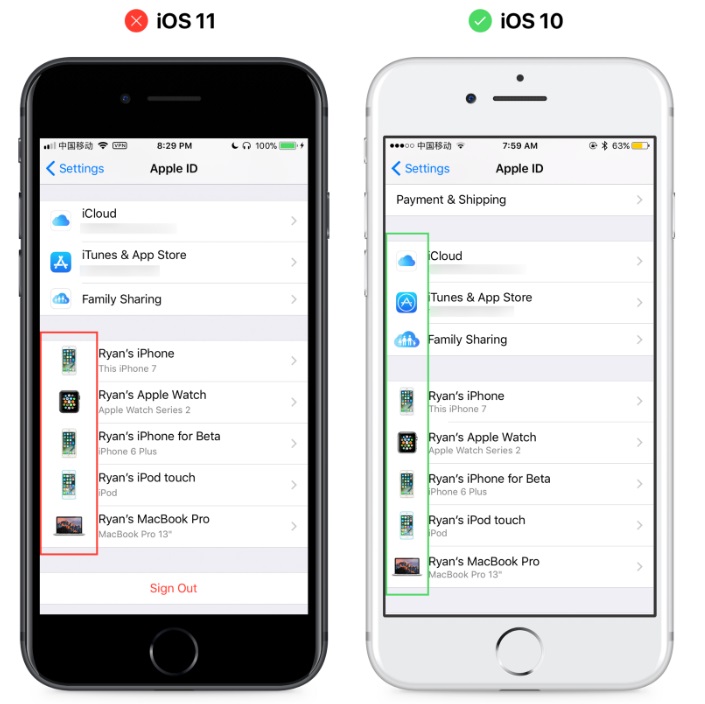 Again, this isn’t the end of the world, but Apple is supposed to be the company that sweats all of the details, no matter how small or seemingly insignificant.