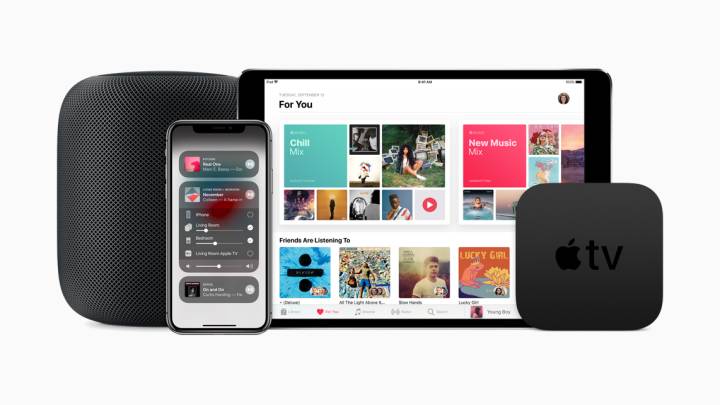 As we expected, iOS 11.4 is available to download right now. Anyone running iOS 11 on their iPhone or iPad should see the update available in Settings right now, and assuming you enjoy having the most up-to-date software, it’s probably worth the 20 minutes of your life to download and update.

Since iOS 11.3 was released not too long ago, there’s not a ton of new emojis or app updates in iOS 11.4. Instead, Apple has brought two major new features, AirPlay 2 and Messages in iCloud. The only aesthetic nod is a special new (PRODUCT)RED iPhone wallpaper, which pedantically speaking, you don’t even need the new update to get.

Undoubtedly the biggest new feature in this update is the addition of AirPlay 2. The first version of AirPlay was a simple system to play music over a Wi-Fi connection. It had better range and quality than Bluetooth, but lacked any particularly sophisticated features. AirPlay 2 is much more like Google’s Cast system or the controls for a Sonos speaker setup, if you’ve ever used those. AirPlay 2 will let users play back music on multiple AirPlay 2 devices around your home, regardless of manufacturer, as well as enabling stereo pairing on the HomePod.

Apple says that a number of other features and improvements are coming under the hood of AirPlay 2 as well. There’s a bigger buffer for music so that network artefacts won’t interrupt your music — although that may also add more of a delay before playback — and a tighter clock sync between devices to allow for multi-room playback without the devices getting out of sync. You will also be able to make phone calls and watch videos on the streaming device without interrupting music playback, which is a big improvement.

Manufacturers including Bang & Olufsen, Bluesound, Bose, Bowers & Wilkins, Denon, Libratone, Marantz, Marshall, Naim, Pioneer, and Sonos have all pledged to support AirPlay 2, which is virtually a who’s-who of Wi-Fi speaker manufacturers. In typical Apple fashion, the biggest advantage AirPlay 2 has over its competitors is the interface. You can select where you want your music to play using the Control Center, which gives you fast and convenient access to groups, as well as easily-accessible volume controls for all the different speakers, something that’s normally buried within the settings menus of other multi-room streaming services.

Siri support for multi-room audio is also promised, so you can say stuff like “Hey Siri, play [music] in the living room,” and then add “and also play this upstairs.” 9to5Mac previewed this feature in the iOS 11.4 beta:

But there’s still a major difference between AirPlay 2 and something like Google Cast. With Google Cast, your phone or PC or smart speaker is just working as a remote control for your internet-connected speaker: You tell the speaker that you want to hear this song or playlist from Spotify, and it goes and finds the song and starts playback itself. With AirPlay 2, the music is being streamed from the device to the speakers, so if your phone drops off the Wi-Fi network for a second, the music will die. On the other hand, it does make it possible to play back songs that you have saved on your device that aren’t available on the internet, so the tradeoffs go both ways.

According to Apple’s website, iMessages perfectly sync across your iPhone, iPad, and Mac, letting you start a conversation in one place, move it over to a tablet while you’re sitting on the couch, and still be able to refer to it when you’re doing Important Business Things on your Mac.

If you’ve ever tried to actually do this, you’ll have realized that iMessage syncing is a buggy lie. That’s because unlike cloud-based messaging services like Facebook Messenger, iMessages get sent from device to device, rather than from one cloud account to another cloud account. iMessage syncing currently relies on your iPhone uploading messages to your iPad or your Mac every time you get a new message, and that just doesn’t work consistently.

Apple’s solution is called Messages in iCloud, and it’s what iMessage should have been in the first place. If you choose to enable Messages in iCloud, your messages will be stored off-device, which has a bunch of benefits. The most obvious one is reliable syncing across all your iOS and macOS devices, but it also means that you can delete old conversations from your phone to save space, that deleting a message on one device will delete it everywhere, and when you set up a new iOS device, you’ll get your entire iMessage history synced instantly.

Depending on how much you nerd out over new Apple wallpapers, this will either be a huge deal or completely irrelevant. Apple released special red editions of the iPhone 8 and iPhone 8 Plus with its (PRODUCT)RED branding, and as per tradition, it also released a special wallpaper to make sure everyone knows your device is SPECIAL. Those wallpapers come to other iPhone 8 and iPhone 8 Plus devices (sorry, iPhone X users!) today, but you can also grab them without downloading the update.