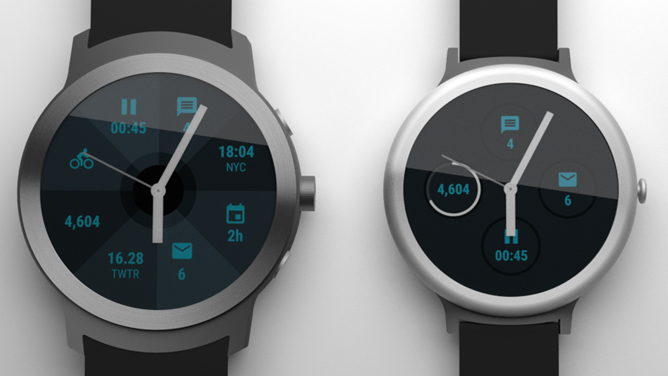 A few days ago, a report said that Google is working on two Nexus-branded smartwatches that will come with Google Assistant support. Google apparently needs such devices to highlight remind everyone that Android Wear exists, and it’s a viable platform for wearable devices. After all, it’s not like anyone else is building hot Android Wear gadgets, ready to take advantage of the next-gen features of the wearable platform. The previous report did not include images showing these purported Nexus smartwatches, but the source is back with renders showing the wrist gadgets.

DON’T MISS: Today is Prime Day 2016: Here’s everything you need to know

These images show both Angelfish and Swordfish, the two upcoming Nexus devices, as recreated by Android Police. It’s worth noting that we’re not looking at official renders of the watches. Google is currently prototyping them, and design changes may occur. The site also notes that Google could always choose to cancel or delay the Nexus smartwatch program. However, it’s clear that Google is indeed toying with the idea of creating its own Android Wear hardware.

Both devices are supposed to sport circular displays, with Angelfish being the bigger model (which also features standalone LTE functionality), and Swordfish being the smaller model.

Pricing details are unknown at this time, and there’s no release date for either model. However, the Angelfish model is probably going to be the most expensive of the two, considering that it has support for LTE, GPS, and heart rate readings. But both devices should demonstrate Google’s vision for wearable devices, and run Android Wear 2.0 out of the box.

You can read more details about these Google Nexus smartwatches at this link.