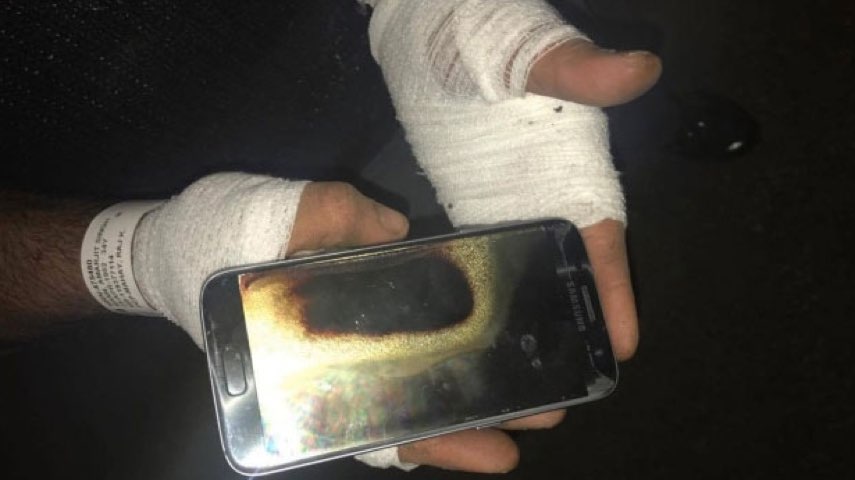 It’s been a rough few months for Samsung. With the Galaxy Note 7 explosions, replacements, more explosions, and subsequent recall, the company is now doing its best to wash the bad taste out of the public’s mouth, but now a different Samsung smartphone has spontaneously combusted, and seriously injured its owner in the process.

Amarjit Mann, a 34-year-old man from Winnipeg, Manitoba, told the Winnipeg Sun that his Galaxy S7 began to feel warm while in his pocket as he was driving. Mann says he grabbed the phone from his jacket and that’s when all hell broke loose.

CHECK IT OUT: Apple insider says demand is dwindling because the iPhone 7 is boring

“I took it out and had it in my hands and it exploded right away,” Mann said in an interview. “When you see smoke, I was shocked. You cannot expect this thing. It was like a nightmare.”

Mann’s hands absorbed the full force of the blast, and has second- and third-degree burns to show for it. After the phone burst into flames he attempted to throw it out his car window, which was open, but the melting phone stuck to his skin.

He says he’s planning to file a lawsuit against Samsung for the incident, as well as potential loss of income due to being sidelined at his job. Mann works as a mechanic, and may be unable to perform his duties for up to four weeks.

Speaking with CTV, Samsung Canada said it will “remain committed to working with any customer who has experience an issue with a Samsung product,” but declined to comment on this specific incident before taking a look at Mann’s smartphone in person.

At the present time, there are no recalls or replacement programs for the Galaxy S7, and no formal recognition of any defect or other issue has been issued.