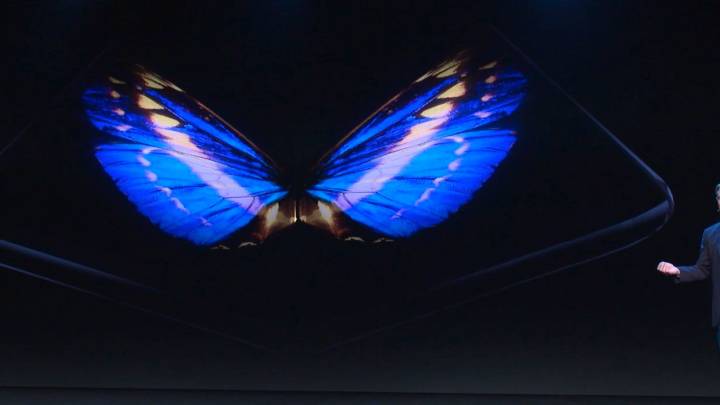 Samsung has a huge year ahead when it comes to new smartphone launches, as the company is expected to unveil the Galaxy S10 and Galaxy F on February 20th. The Galaxy S10 series will be the main moneymaker for the company this year, but the foldable phone is also essential for the company, considering all the hype around it right now. We’ve got billboards in Paris, as well as reports from Korea driving home the same point, that the Galaxy F — commercial name pending — is a breakthrough device, one that signals Samsung isn’t done innovating in the mobile landscape. Samsung, of course, wants to set the tone when it comes to new smartphone form factors, just as it did with the Note series years ago.

But this time around, competitors will be quick to launch foldable devices of their own, with Apple, Microsoft, Huawei, LG, and Xiaomi being a few of the companies rumored to be developing such devices. Apple is the most secretive of the bunch, and we have no idea when a foldable iPhone will be ready for mass consumption. 2019 iPhones are largely expected to resemble last year’s models when it comes to overall design, and a new iPhone design isn’t expected until 2020. A report did say that the first foldable iPhone will launch next year… but we may already have an idea of what Apple’s foldable phone could look like.

All the way back in 2013, more than a year before Apple launched the bigger iPhones that fans had been craving, an Apple patent came to light showing a strange iPhone design, one that heralded several changes that were in the works for Apple’s flagship smartphone.

The one thing that’s missing is the actual wraparound screen, a display that wraps around the back of the phone. Apple’s wraparound iPhone surfaces now and then, but I always thought the patent was more about the technologies that such a device would require, like in-display buttons, than the actual wraparound screen. I don’t think that a wraparound display would be useful, even though a rear-facing screen might have some uses. Apple certainly thinks the back of a phone should be put to good use — from the patent:

In the last few years the functionality of portable electronic devices has increased exponentially. Further improvements be realized by investigating ways to maximize the utility of unused portions of these devices. Form factor is an interesting area for development given that a large majority of portable electronic devices have settled into a standard form factor; namely a flat planar form factor with a display on one side and an opaque housing which contains the electrical components covering the rear surface of the device. Unfortunately, this popular form factor, leaves the sides and rear surfaces of the device unused or at best configured with buttons and switches with fixed location and functionality. Since many of these buttons and switches have fixed functionality they cannot always be incorporated into third-party applications.

Since I did mention Samsung’s hype about its foldable handset, I’ll point out a quote from a Korea Herald report about Samsung’s foldable phones endeavors:

Compared to the wrap-around display phone — which Apple seems to be looking into as one possible design for its foldable model — [Samsung Design Innovation Center head Federico Casalegno] said Samsung’s in-folding display phone could provide better experiences for users in terms of design.

The report relays statements made by Casalegno at a press event last week, but what’s curious is that Samsung seems to know what design Apple has chosen for its foldable iPhone. It’s unclear where Samsung got its information from. A few years ago, we learned that Apple teamed up with LG to create a secret smartphone design, one that Samsung could not copy. At the time, it was believed that Apple was developing foldable screens with LG’s display arm. LG, of course, is rumored to be working on foldable phones of its own.

In addition to this remark from Samsung, we also have one other interesting development that’s worth revisiting. A few weeks ago, well-known leaker Evan Blass posted the following video:

At the time, I said the foldable smartphone in the video looks a lot better than the Galaxy F. The interface seemed quite responsive, and the UI was quick to transition between tablet and smartphone mode. But the second I saw the person in the video folding the left and right sides of the display behind the middle part, which stayed active, I immediately thought about Apple’s wraparound iPhone patent.

Considering all the iPhone technologies Apple has unveiled since 2013, such a design for a foldable iPhone would make plenty of sense. The phone would have an all-screen design, with or without a notch. The display would extend from corner to corner, and the phone would not have any physical home button or headphone jack. A variation of 3D Touch could help Apple place volume controls on the sides that would adapt depending on whether the phone is used in tablet or phone form.

That said, this is just speculation at this point, and there are plenty of things to iron out before any smartphone maker launches such a device. Durability is one thing to take into account, for example. A foldable phone with a wraparound design would have all sides of the screen exposed at all times.

Blass wasn’t able to confirm whether Xiaomi is making a phone like the one in the clip above. But if someone made that foldable phone prototype, it means that we might see such devices in stores in the coming months or years — assuming, of course, the phone in the video is an actual gadget, not a digital render.

Xiaomi is already rumored to be working on foldable devices of its own, and Chinese display giant BOE may be the company that will provide  bendable displays to local device makers. Reports said last year that Huawei would work with BOE on its first ever foldable handset, a device that may be introduced as soon as late February, at MWC. If it sounds familiar to Apple fans, BOE is also a company that has been vying for iPhone X display orders, according to recent reports. In other words, Apple is likely aware of all the display prototypes BOE may be developing, including foldable screens, in addition to display prototypes from other big names in the industry, including Samsung Display, LG Display, and others.