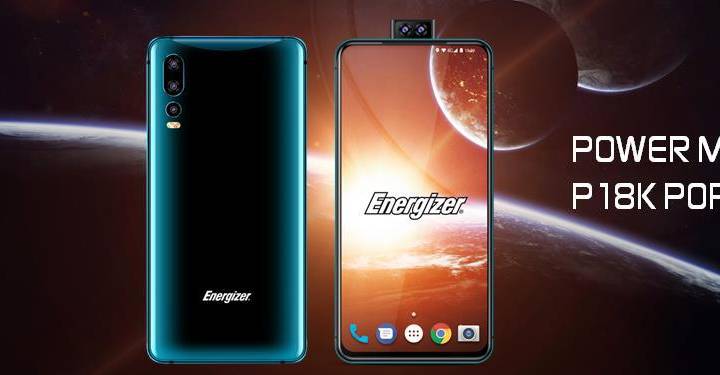 With each new generation of smartphones, we want better battery life and faster battery charging… and we’re seldom satisfied. This is in spite of the fact that smartphone tech has advanced to a point where components are more efficient than ever, allowing vendors to offer features that weren’t available in previous generations. That’s why the phone we’re about to show you will win some people over instantly thanks to its crazy battery capacity that might last light users an entire week before needing to be recharged.

The official announcement is still a few days away, but the Energizer P18K Pop with its 18,000 mAh battery has already leaked. Detailed a few days ago by GizChina, the phone looks like what you’d expect from some 2019 flagships.

The P18K Pop features an all-screen design with no notch at the top and a minimal bezel at the bottom. That’s a massive 6.2-inch display with Full HD resolution. Avenir Telecom, which licenses the Energizer brand, made the design possible thanks to a slide-out selfie camera. No, it’s not the ideal design for smartphones, but it allows smartphone vendors to “kill” the notch.

We would have to say that the main feature of the handset is its humongous 18,000 mAh battery, which is the kind of battery you’d find on portable power banks these days. The report says the battery lasts for 90 hours of calls, 100 hours of music, or two days of video playback. In standby mode, the battery lasts up to 50 days on a single charge, which is absolutely insane.

The phone also features a USB-C port that will support fast-charging, although it’s unclear how long it’ll take to recharge this monster.

Other specs include 6GB of RAM, 128GB of storage, and a MediaTek Helio P70 processor under the hood. When it comes to cameras, the P18K Pop features five shooters in total, including two on the front and three on the back. We’re looking at 16-megapixel and 2-megapixel sensors for the pop-up selfie camera as well as 12-megapixel, 5-megapixel, and 2-megapixel lenses on the back. The last one is probably a depth of field sensor.

All in all, this phone seems ready to compete against plenty of mid-range Android devices this year. Not only does it pack the right kind of design and features that Android buyers will be looking for this year, but it also has a monster battery that should easily last for several days of use on a single charge. That said, we still have some questions about the handset. We have no idea how thick and heavy the device is, or how much it’ll cost when it’s released this summer.

What’s even crazier about this Energizer phone is that it’s just one of the 26 phones the company will show off at MWC this year, which means Android fans looking for new phones on a budget will surely find an Energizer-branded device in stores this year to meet their needs.