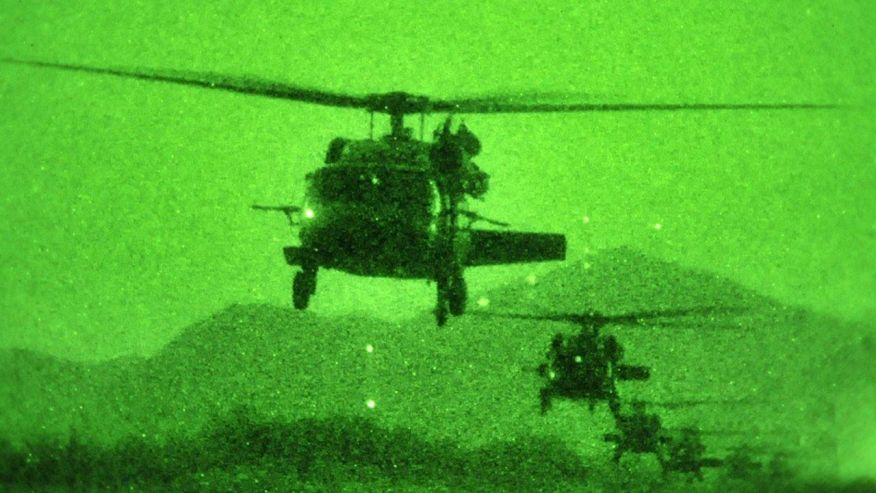 ALIAS can fly a military helicopter and then move into another aircraft and fly that too— and ALIAS is not human.

Driverless cars may have been making headlines of late, but DARPA’s ALIAS program has also been making great strides in the development of “digital pilot” technology.

The brainchild of the legendary institution DARPA (the Defense Advanced Research Projects Agency), ALIAS easily drops into an aircraft and becomes an invisible, automated co-pilot for a human pilot.

And ALIAS is so good that it has the potential to eventually fly all sorts of military aircraft on its own— and it could even fly commercial jets like the ones Americans take to visit family or go on vacation.

Two teams are currently joining forces with DARPA to make ALIAS a reality: Aurora Flight Sciences and Lockheed Martin Sikorsky. One company will go on to win the ultimate ALIAS contract.

ALIAS stands for Aircrew Labor In-Cockpit Automation System (ALIAS). It is sort of like an automation kit that is a combination of hardware and software. And it makes aircraft very smart, enhanced with a digital co-pilot.

Aurora Flight Sciences has been working on a version with a robotic arm, and the team held a successful test on October 17 with a Cessna.

Related: These hackers could save your life in a disaster

DARPA invited FOX Firepower to watch as Lockheed Martin Sikorsky put their ALIAS through a battery of thorough testing on October 19 in New York. The tech was successful in both a helicopter and fixed wing.

Lockheed’s ALIAS kit is about the size of a small briefcase, meaning a pilot can easily plug it into the aircraft. In a way, it amps up its own smarts and by linking the aircraft to a controller on the ground.

Remarkably, the same ALIAS smart tech can fly both rotary-wing and fixed-wing aircraft.

After the mission, the pilot can easily pull the kit from the helo and then take that very same kit over to a fixed wing aircraft.

The ALIAS tech has built upon five decades of plane automation. And it also leverages cutting-edge innovation for drones.

What sort of tech advances does it take to achieve state of the art digital co-pilots? Tech like a ramped up tablet user interface, “machine vision” that allows ALIAS to read the data displayed in the cockpit and methods to actuate flight controls. Going forward, tech like speech recognition could be incorporated.

From takeoff through to landing, ALIAS can help with an entire mission. If something unexpected happens, like a system failure in flight, then ALIAS could support handling it or even address the problem itself. ALIAS could constantly monitor the health of the aircraft and enhance the maintenance, response and safety of the aircraft.

“It has the brains to figure out how to fly the aircraft by itself,” he said, gesturing to the tablet in his hands. “This tablet actually talks to that system, talks to the brains of ALIAS…”

How capable is ALIAS?

“The brain has learned and it knows how to fly the aircraft, how to hold the aircraft in a perfectly still hover inside a tiny one foot box, it will beat the performance of a human pilot… If you tell the aircraft to crash into the ground it won’t let you do that,” he said. “It will keep you safe.”

At the Lockheed Martin Sikorsky testing, it was clear that the tech is so smart that someone on the ground can pilot it effectively with a bare minimum— if any— flight training. The interface is a tablet very similar to those folks would use at home. Using a finger, the user can instruct ALIAS to make the helo fly higher, to hover, to fly a complex pattern, or pretty much anything you could think to do.

Related: A new combat vehicle that swims for the Marine Corps

During the testing, I flew the helicopter using a tablet on the ground and effortlessly controlled the altitude, the speed, the direction and flight plan.

Why a digital co-pilot?

Dr. Patt detailed how ALIAS will be groundbreaking.

“In the long term, we envision this technology really changing the role of the human on board – so instead of trying to memorize what every button does and trying to know where to find the right procedure in the manual if something goes wrong, we can have a computer that does that,” he said. “And the human can focus on the big picture mission objectives.”

Aircraft these days already have a very high level of automation like autopilot, but this is a whole other level.

Even in highly-advanced, highly-automated aircraft, pilots must manage a high volume of emerging data, handle complex tasks and rapidly respond to any emergency that might arise.

As a digital teammate, ALIAS could free up the highly skilled human pilots to focus on tasks that require their special skill sets, talent and experience. Tasks like focusing on an enemy threat.

If an aircraft is enhanced with ALIAS, then it could reduce the number of personnel needed to fly military missions. It is hoped it could also be used to improve handling, reliability as well as safety and mission performance overall.

Lockheed Martin Sikorsky’s Director of Autonomy Igor Cherepinsky stressed it is absolutely not about replacing human pilots, but instead about supporting them and giving them a smart teammate.

After this flight-testing phase, DARPA will move ALIAS to Phase 3 and that could include testing voice-recognition. This would allow pilots to interact with ALIAS like they would a human copilot in terms of flying the aircraft.

There’s potential, for example, for ALIAS to be used to augment the U.S. Army Blackhawk fleet. This tech has progressed so quickly, and is so smart and so promising, that ALIAS cyber co-pilots could be flying the skies in both military and civilian aircraft within the decade.