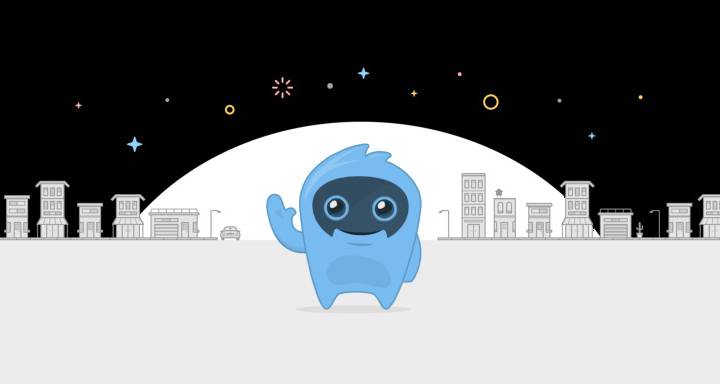 What do you get when you take the former head of platform at Facebook, a former Mozilla engineer, veterans of other companies like Microsoft and Amazon, and an interest in building an assistive chatbot that stands apart from competitors in the space?

The answer is Ozlo, a chatbot in the form of a cute, blue critter that answers questions from users with cards that contain deep links to relevant apps and websites. The company built around the service – headed up by CEO Charles Jolley, the former Facebook platform head – has offices in Palo Alto and Seattle and a workforce of 28.

And it landed a $14 million investment in May from Greylock and AME Cloud Ventures partly because Ozlo represents something a little different in a world that’s starting to move from apps to more voice interaction with our devices. What Jolley and his team wanted to build was not just a personal digital assistant that’s helpful and there with the right answers when the user needs them, but one that can also synthesize all the facts it’s been fed and give advice — the same way you’d look at a trusted friend.

“What really makes Ozlo different is he has two parts,” Jolley said, always using the masculine personal pronoun when talking about the chatbot, later stressing how important it is that Ozlo be seen to have a human-like personality. “He’s an assistant you can chat with, just like a lot of these other bots or assistants coming out right now. He’s also an expert AI system that we’re able to feed with information, and he can become an expert on any topic.”

The team decided to start with food and restaurants and learn about people and their behavior from there before adding to Ozlo’s bag of tricks.

“Ozlo knows about 20 million places in the U.S., he’s read about 400,000 menus and he’s read through terabytes of reviews from Tripadvisor, Yelp, Foursquare, Thrillist — about a dozen sources,” said Jolley, who added that the team has been building this for more than two years. “He’s integrated all that to become really an expert on the topic, so that you can ask him not just to do things for you but ask for advice.

“Also, the way most of these assistants work – if you say something like, ‘Find me a really awesome pizza place,’ and it doesn’t know what ‘awesome’ means, Siri and some of the others will just ignore that word even if that meant something important to you. Maybe that word was ‘gluten-free.’ Whereas Ozlo will tell you he doesn’t know that word. That’s really important, because it makes peep trust him.”

You can ask him for places serving happy hour right now near where you are or the highest rated burger in your neighborhood or suggestions on where to eat if you’re craving a particular dish. Here’s an example of Ozlo in action:

Over time, the team plans to add more functionality as it gets better at the initial restaurant-related interactions. Good thing, because the space is, of course, heating up fast.

The day after Jolley announced Ozlo to the world in a Medium post, the creator of Siri showed off the hotly anticipated new AI system Viv at Techcrunch Disrupt NY, presenting a chatbot that can handle a variety of intricately worded questions with ease and will be integrated with other services when it launches.

Viv especially wowed the crowd at that demo with how much it could do on its own, compared to Siri, which often frustratingly kicks the user over to a web search instead of executing their command herself. Meanwhile, tech’s other usual suspects — Amazon with Alexa, Facebook with its bots integrated into Messenger, and Microsoft with Cortana — are likewise pouring into this space.

That’s fine, says Jolley. He thinks it’s likely to end up being a situation somewhat comparable to the way streaming video users sign up and pay for multiple competing services like Netflix, Hulu and Amazon’s, since they all offer slightly different things.

“I think you’ve seen that more and more, people are installing apps less,” Jolley said. “The thought is there’s got to be some better way to find information. You can see with Siri — Siri’s great if you already know exactly what you want. When you’re kind of not sure what you really want to do, it’s still up to you to have all the right apps on your phone and kind of figure it out on your own. And we felt like there’s some technology coming around that would make it possible to do something a lot better.”