Although Apple has a policy of not releasing unit sales for the Apple Watch, it’s no secret that the device has continued to grow in popularity with each passing year. Especially with last year’s Apple Watch Series 3 — an update which at long last introduced cellular functionality — Apple’s wearable has slowly but surely morphed from a niche product into something of a mainstream device.

In light of that, new research data from IDC reveals that Apple during its most recent fiscal quarter shipped approximately 4.2 million Apple Watch units, a substantial increase from the estimated 2.7 million units the company is believed to have shipped during the September quarter of 2017. All told, Apple Watch shipments grew by an impressive 54% year over year.

Apple managed to launch its Series 4 Watch, its first watch approved for medical use, towards the end of the quarter. The new design and sizes along with the latest version of Watch OS were welcome changes though the latest series only accounted for less than 20% of all Apple Watch shipments. The reduced price on the still affable Series 3 accounted for the majority of Apple’s shipments during the quarter.

As to how the rest of the smartwatch landscape shook out last quarter, IDC’s research found that Xiaomi came out ahead with a market share of 21.5%, followed by Apple at 13.1% and Fitbit at 10.9%. Samsung, meanwhile, saw its market share grow slightly from 3.6% to 5.6% over the past 12 months.

As for how much money Apple is making with the Apple Watch, well, that remains up for debate. What remains clear, though, is that revenue from Apple’s “Other Products” category has exploded in recent years. While the Other Products category includes items such as AirPods, the , Beats products, and other accessories, it stands to reason that the bulk of the revenue from that category comes from the Apple Watch.

With that said, consider this: during the September quarter of 2016, Apple’s Other Products category generated $2.37 billion in revenue. Just two years later, revenue from that same category jumped by 78% to $4.2 billion.

IDC’s full research data can be seen below. 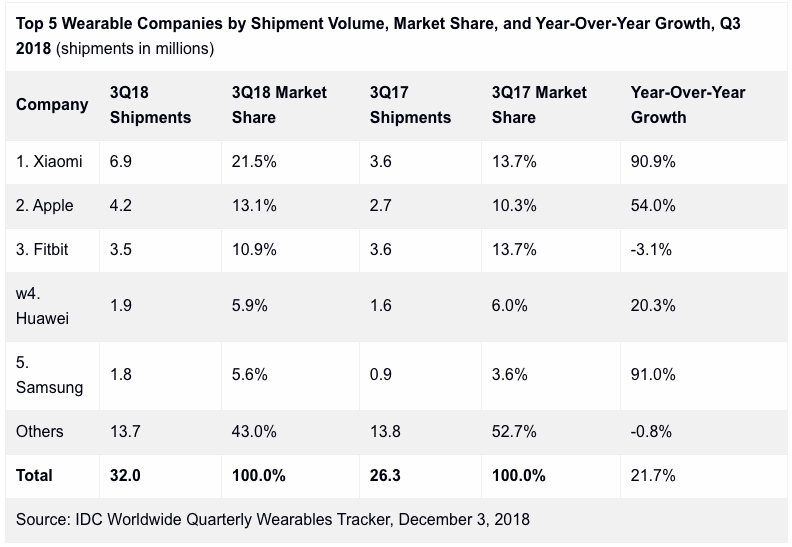