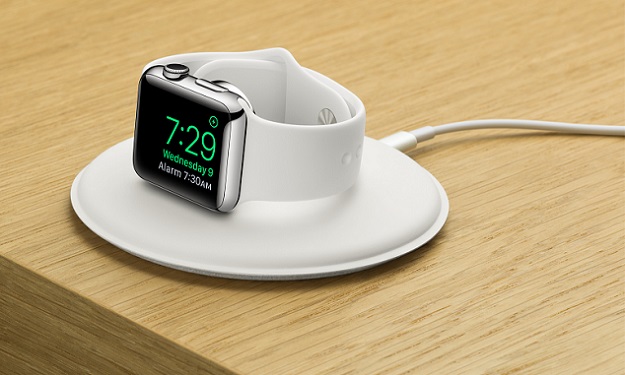 Apple earlier today launched a new and rather sleek magnetic charging dock for the Apple Watch. Priced at $79, the charging dock enables users to more easily charge up their device overnight without having to use a direct cable.

The dock itself comes equipped with a magnetic charging ring positioned mid-center. In a clever twist of design, the charging ring itself can be popped out and positioned vertically, thereby allowing Apple Watch users to charge up their device by either laying it flat or on its side.

Of course, the benefit of charging the Apple Watch on its side is that you can turn it into a makeshift alarm clock by activating Nightstand mode. When enabled (which you can do by going to General > Nightstand Mode), the display will feature the time, date, how much battery you have left, and any impending alarms. When an alarm does go off, there’s even a snooze feature that can be activated by pressing down on the digital crown. Conveniently, Apple notes that when you charge up the device on its side, Nightstand Mode will be activated automatically.

The photo below shows the charging ring mechanism positioned vertically.

And another photo to quell your curiosity.

Yesterday, word of Apple’s new charging accessory leaked out via a hands-on video showcasing unboxing footage and the charging pad in action.