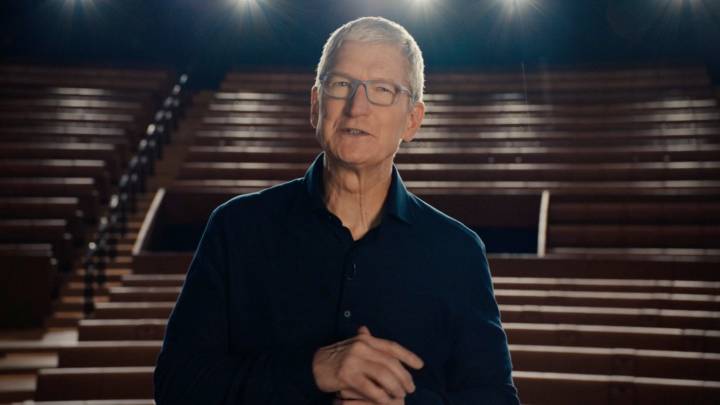 The war of words at the center of the ongoing battle between Apple and Facebook has arguably taken a particularly nasty turn in recent days, with Apple CEO Tim Cook appearing to suggest in a high-profile speech that Facebook’s Orwellian approach to its business has terrible and dark real-world consequences. That was one of the takeaways of a presentation the Apple CEO made during the EU’s Computers, Privacy and Data Protection conference, which Cook handled deftly enough that he didn’t even have to call out Facebook by name in order for his verbal shots to find their mark.

“I try to get somebody to think about what happens in a world where you know that you’re being surveilled all the time,” Cook said in an interview with Fast Company, on the same day as his speech. He went on to call privacy, something that iOS 14 will be even more keenly focused on, “one of the top issues of the century.” At the same time, Facebook and its CEO Mark Zuckerberg are so worked up against Apple right now — to the point that the social network is even said to be prepping a lawsuit against Apple — because of forthcoming changes to iOS 14 that Facebook thinks might cripple its lucrative ads business. The iOS changes will give users more ability to limit the power of apps like Facebook to track them around the web. But in light of all this, though, here’s a question that a reasonable person might ask in response: If Apple thinks Facebook is so horrible, why does the iPhone maker run a number of different official Apple Facebook pages?

Here, for example, is the link to Apple’s Podcasts page on Facebook, which has been liked more than 26,200 times and has more than 31,000 followers.

Here’s the Apple TV page on Facebook, which provides informative updates about the fantastic content on Apple’s Netflix-like TV+ service (for which Apple picked up some well-deserved Golden Globe nominations on Wednesday). This page has been liked more than 28.9 million times on Facebook, and it has almost 29 million followers.

There’s also the Apple Music page on Facebook, which has garnered around 4 million likes and more than 4 million people following the page on the social network.

You could argue that this is an odd look for Apple, which has especially lately left people with the impression that the company thinks Facebook is super creepy. Then again, the fact of the matter is that the official Apple pages probably have more to do with Facebook’s size, and a kind of too-big-to-fail attitude that still seems to be prevalent among major brands and advertisers (who feel the inexorable need to advertise on and use the service, even if they can’t stand it). Perhaps the truth, in other words, is that you can loathe Facebook’s business model and its creepy tracking of users while simultaneously feeling like you’ve got no choice but to utilize the social network’s tools in order to reach your users. Facebook is still the biggest of them all — which, you’ve got to admit, also comes back around to the concerns that Cook had in the first place.

It’s a less than ideal place to find yourself in, peeved at Facebook’s tracking of users but also wanting those same users to engage with your company’s Facebook pages that you feel you have no choice but to set up — because Facebook is so big, which only underscores why you’re so peeved at its business practices and user tracking. But that’s where things stand at the moment. And on and on that circle turns.