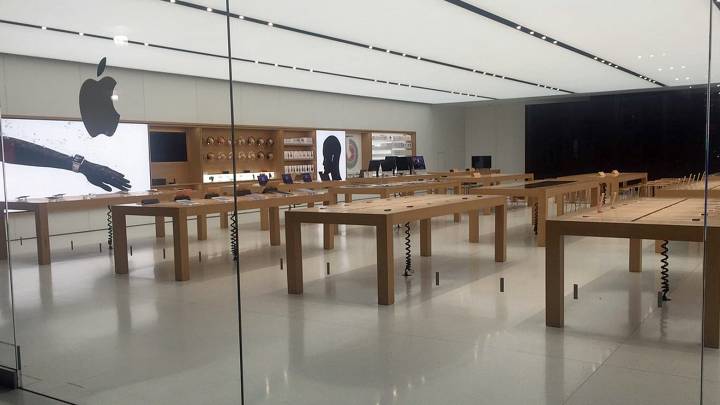 Of all the retailers in your average US mall, Apple Stores are probably near the top when it comes to the value of the goods on display, surpassed only by jewelry stores. With that kind of merchandise laying around, you’d think that having $40,000 worth of goods stolen in November 2016 would have prompted the Apple Store at The Village mall in Corte Madera, California, to seriously beef up its security protocols. Apparently that wasn’t the case, because thieves just hit the store again, making away with $24,000 worth of Apple hardware, just six months after being cleaned out the first time.

As the local ABC affiliate reports, the store was robbed by a group of five individuals who were able to make off with a total of 17 iPhones, three iPads, and two Mac computers. The thieves were spotted by a security guard but managed to evade capture, and it’s unknown whether they escaped the area on foot or in a vehicle.

Look at the empty counter at the Corte Madera Apple Store. Police say 5 thieves grabbed about $24k worth of products and took off last night pic.twitter.com/FSrkYSH32q

The robbers apparently entered the store just after its regular closing time of 8 p.m., though it’s unclear from the original report whether or not the store’s doors were still open or if the group physically broke in.

It’s worth noting that The Village at Corte Madera is an open air mall, where stores are grouped into small strips. This would presumably make it easier for criminals to make their escape since, unlike a traditional closed mall layout, stepping out of the store itself puts you outside. The Village boasts “24-hour professional security for our stores and guests,” but it looks like they might need to rethink their strategy a bit.