After many months shrouded in secrecy, concrete information regarding Apple’s plans in the automotive space are finally starting to leak out. While Apple’s initial plans may have centered on developing and manufacturing an Apple-branded car from scratch, Apple in recent months is said to have narrowed the scope of Project Titan to focus more on autonomous vehicle technology.

Far from idle speculation, Apple earlier this month applied for and received a permit to test driverless cars in the state of California. And a few months before that, Apple penned a letter to the National Highway Traffic Safety Administration (NHTSA) indicating that it is “investing heavily in the study of machine learning and automation” and that they are “excited about the potential of automated systems in many areas, including transportation.”

Earlier this afternoon, Bloomberg obtained photos of the Lexus vehicles Apple has outfitted with a wide array of sensors.

The white Lexus RX450h SUV emerged from an Apple facility this week and was kitted out with an array of sensors, according to a person who saw the vehicle and provided photos to Bloomberg News. The sensors included Velodyne Lidar Inc.’s top-of-the-range 64-channel lidar, at least two radar and a series of cameras. The sensors appear to be products bought off the shelf from suppliers, rather than custom-made, according to an industry expert who saw the photos.

Two such photos are featured below.

And below is a shot of the cars from the back. 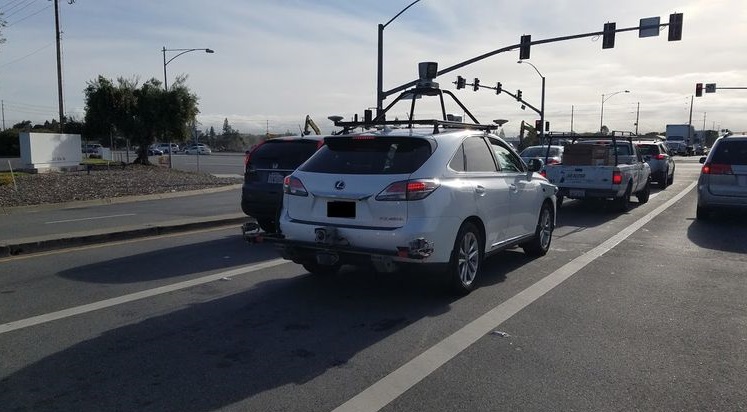