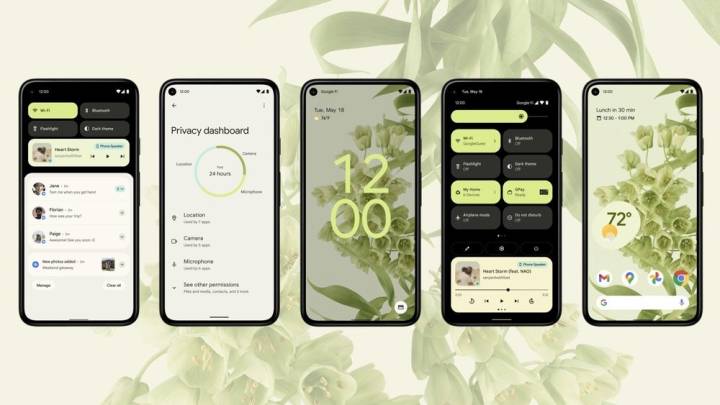 Google unveiled Android 12 earlier this week during its busy I/O 2021 keynote, confirming most of the Android 12 leaks that preceded the developer conference. Android 12 introduces a significant design overhaul, including a one-touch customization feature that allows each user to give their phones and tablets a distinct look without installing any themes. The redesign also touches other user interface elements, like buttons and menus, with Google insisting that the fluid redesign would work well on various types of devices. Then, Google built all sorts of new features into Android 12 to improve the overall smartphone experience and the expected privacy and security updates.

Most of Google’s privacy initiatives for Android 12 leaked before the event. We knew about the microphone and camera indicators, the new Privacy Dashboard, and the app hibernation feature. But Google confirmed most of them during the main event or in later presentations for developers, proving that it’s ready to enhance privacy features in the future. The best new privacy features will only be available once Android 12 beta 2 rolls out, however.

Google isn’t quite ready to copy Apple’s two big privacy updates that came with iOS 14. Google’s app privacy labels will start rolling out in 2022 at the earliest. Apple’s anti-tracking features have reportedly ignited an internal debate at Google, as the advertising giant is aware these features can impact its ad business.

Android 12 will still deliver a few notable privacy features, with the Privacy Dashboard being one of the highlights. The dashboard will inform users about what data apps use, including Google’s apps. The dashboard will contain information about three specific types of personal data, including location, camera, and microphone. Users can see a clear timeline of the last 24 hours and decide whether they need to revise permissions for specific apps or not. It’s not just third-party apps that will show up in the list, but Google’s apps as well.

Speaking of location, Android 12 will give users even better control over location sharing. Specifically, they can choose to let an app access their actual location or offer only an approximate location. Nearby device permission is another useful upgrade in Android 12 for protecting location data. The feature targets wearable gadgets and Bluetooth devices that connect to the phone for pairing. Rather than accessing the user’s actual location, these devices will request access to nearby devices.

Microphone and camera indicators will be present in the top right corner, just like on iPhone, signaling that an app uses one of the sensors. Users will be able to go into Quick Settings to manage the sensors and permanently block access to them. Once the sensors are shut down, apps that require a microphone and/or camera access will tell the user to re-enable them.

The iPhone also tells users when an app access clipboard data and Android 12 devices will do the same thing, as long as the data has been copied from a different app or source than the app at the forefront. A message will appear at the bottom of the screen telling users of the clipboard access.

App hibernation is another feature that will sound familiar to iPhone users. iOS can auto-delete unused apps when storage becomes a problem, and Android 12 will do the same. The feature builds on the permission auto-reset feature launched last year that revokes permissions for an app if it’s not used for an extended period. App hibernation will not just revoke permissions. It’ll also stop the app from using resources, including memory and storage. Launching the app will bring it out of hibernation.

The Privacy Dashboard, microphone and camera indicators, Quick Settings sensors toggles, and clipboard read notification will only be available to users in beta 2. Nearby device permissions, approximate location, and app hibernation are available right now.