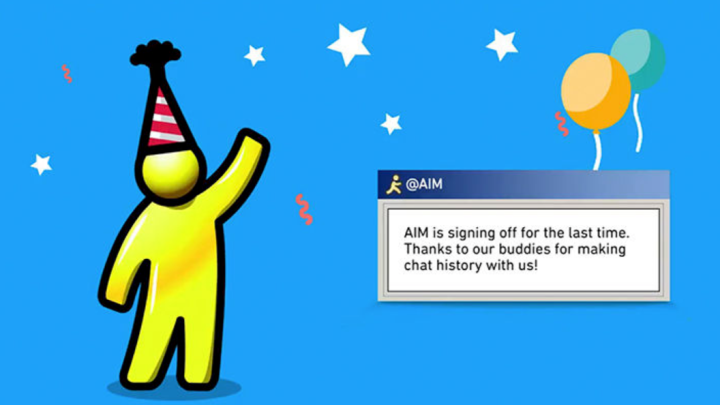 If you were between 10 and 25 years old during the late 1990s and early 2000s, there’s a really really good chance you had an AOL Instant Messenger account. The service, called simply AIM by so many people that AOL starting calling it that, too, was the ultimate communication tool in an age where you still had to pay for text messages and smartphones hadn’t yet been born. Today, Oath — the monolith that resulted from the AOL and Yahoo merger — announced that it will be killing AIM as of December 15th, 2017.

In an email this morning to AIM users, the AOL Instant Messenger team announced the service’s end, while thanking everyone for keeping the service alive for over two decades. Its death is the end of an era, and it’s taking a lot of good memories along with it.

The farewell email reads as follows:

We see that you’ve used AOL Instant Messenger (AIM) in the past, so we wanted to let you know that AIM will be discontinued and will no longer work as of December 15, 2017.

Before December 15, you can continue to use the service. After December 15, you will no longer have access to AIM and your data will be deleted. If you use an @aim.com email address, your email account will not be affected and you will still be able to send and receive email as usual.

We’ve loved working on AIM for you. From setting the perfect away message to that familiar ring of an incoming chat, AIM will always have a special place in our hearts. As we move forward, all of us at AOL (now Oath) are excited to continue building the next generation of iconic brands and life-changing products for users around the world.

You can visit our FAQ to learn more. Thank you for being an AIM user.

The service was one of the most popular messaging services of its day, once holding the majority of online messaging market share, with its primary competitors being ICQ (gross) and MSN Messenger (ew). Everything from the now iconic AIM “Running Man” mascot to the familiar incoming message sound effects are pure nostalgia today, but the service remained alive and kicking for many years after its peak.

In many ways, AIM’s inevitable death is well overdue, but that doesn’t mean we can’t still be saddened to see the chat tool which occupied our high school nights finally meet its demise. If you feel like waking up your old AIM account, putting up a cryptic away message about your crush, and writing your favorite movie quotes in your profile, you still have a couple of months to do so, but after that it’ll be gone for good.