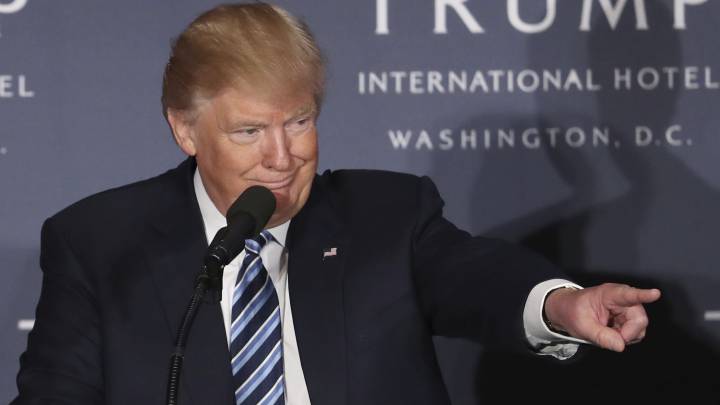 President-elect Trump has been in office for -71 days at this point, but the controversey is already beginning to flow. No, I don’t mean the anti-Trump protests; rather, this is Trump trying to literally rewrite his campaign pledges by just straight-up deleting them off his website.

Luckily, this is the internet, and it’s difficult to delete stuff permanently.

You may remember that back in December, Trump called for a ban on all Muslims trying to enter the country. He literally stood behind a podium and read a statement saying that “Donald J. Trump is calling for a total and complete shutdown of Muslims entering the United States, until our country’s representatives can figure out what the hell is going on. We have no choice.”

Well, Donald is soon to be this nation’s chief representative, and it looks like there is another choice. Trump’s Muslim ban proposal has been sitting on Trump’s website since early December. But sometime around Tuesday evening as the results of the election became clear, the post was removed, and replaced with a redirect to Trump’s home page.

Using the Internet Archive’s cache of the page, you can see that this was the case up until an hour or two ago, when the Muslim ban proposal was restored in its entirety. Not insignificantly, media sources started reporting on the takedown a few hours ago.

So, Trump’s staff initially pulled the statement, and then when the backlash hit, quietly put it back up without saying a thing. Not exactly nifty political maneuvering, but then again, Trump has never actually been photographed using a computer.

It’s also worth mentioning that Trump’s policy page on immigration makes no mention of his much-vaunted Muslim ban.