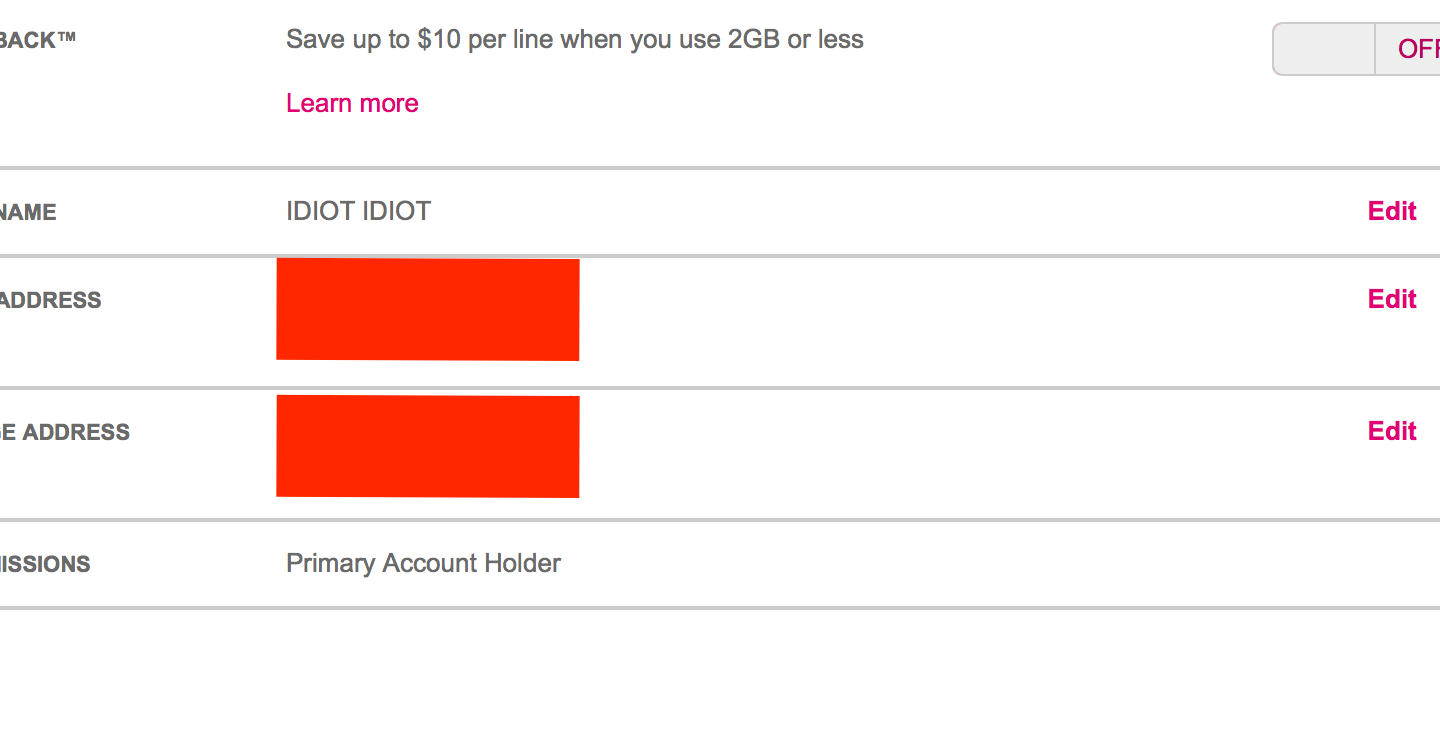 Customer service is a hard job. You deal with all sorts of people who’ve taken the mantra “THE CUSTOMER IS ALWAYS RIGHT’ to heart, and don’t really understand that you don’t have the authority to give them free service for life.

But that still doesn’t explain away what happened to one T-Mobile customer, who claims that after a dispute with T-Mobile customer service, the nickname on his account was changed from “Luke” to “IDIOT IDIOT.”

Luke, a T-Mobile customer from Chicago, signed up for an iPhone 7 promo in September. The promotion promised a free iPhone 7 if you’re upgrading from an iPhone 6S, with the “free” part meaning you pay for the device upfront, and receive bill credits for the phone over the next 24 months.

Unfortunately, those bill credits have yet to be applied, even though numerous full billing cycles have passed since the phone arrived in October. It’s a common problem among T-Mobile customers that have contacted BGR, and one that usually takes a few rounds with customer service to achieve.

So, Luke switched customer service teams, and reached out over Twitter:

“This guy tells me it can take 7-10 business days to resolve right off the bat. Then he tells me that I didn’t order the device until 10/07 and that why I haven’t gotten credits. So I told him that was false and if he scrolled up on my previous messages with the Twitter team, he would see I ordered it on 9/09. So he tells me that he’ll try to resolve it but it can take 7-10 days. I say okay and cross my fingers that it gets resolved.”

This is where things get weird, and a little rude:

“I am using T-Mobile the next day and notice at the top of my screen it says “IDIOT.” I at first thought this was some error or something. I live in Illinois and our Department of Transportation is IDOT, so I was thinking this might be something like that. I didn’t really look into it until the next day when I logged on and saw that right next to my line it says “IDIOT.” I never set up any kind of nickname on my account and never leave my phone unlocked or in the hands of others.”

Of course, it’s easy to fake these things in Photoshop, and T-Mobile has not yet confirmed Luke’s account to BGR. After noticing the change, Luke contacted T-Mobile support via Facebook and Twitter. The reps there told Luke that he must have changed the nickname himself, or someone got into his devices and did it for him.

Luke says that in multiple chats, the rep said that the nickname was changed “by me back in October because my account history listed a “profile change” on 10/12 (the day I CREATED MY ACCOUNT) but I proved them wrong by going in and changing the nickname back to my real name and there was no listed profile change in the account history notes.” Luke appears to be right, based on testing BGR did on another T-Mobile account.

So far, Luke has yet to resolve either the bill credits, or who changed his account name. It is possible this is all a giant fake — not a bad way to get billing issues resolved! — but based on the screenshots and information provided, it seems that T-Mobile customer service is going to need some courtesy retraining.

We are concerned and investigating this.