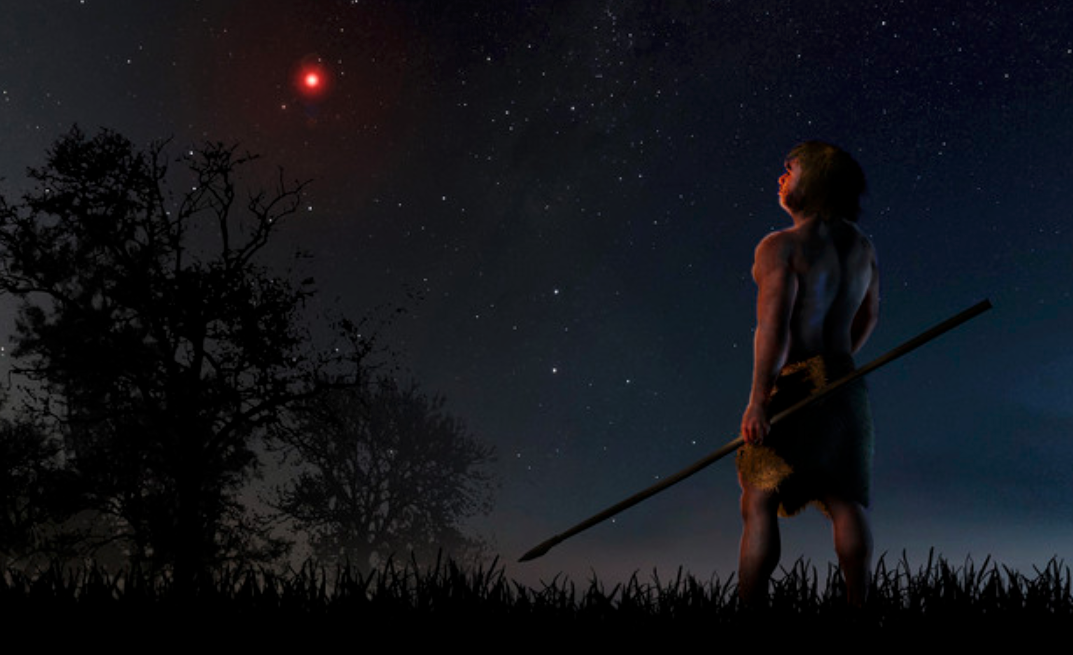 These days we only really see stars in two contexts: our Sun, which is extremely close and holds us in its gravitational grip, and distant stars which to the naked eye appear as nothing more than blinking lights in the night sky. New research suggests that some of the earliest humans witnessed something different, and it would have been both incredibly confusing and potentially terrifying: a free-floating star flying by our Solar System at an incredibly close distance.

A new paper published in Monthly Notices of the Royal Astronomical Society explains how the gravitational pull of a star flyby some 70,000 years ago slightly altered the orbits of hundreds of objects in our Solar System. These objects, which demonstrate hyperbolic orbits, are tugged on by an incredibly large body that astronomers have now determined was a rogue star. The star was so close that early humans would have seen it streaking across the sky, and who knows what their reactions might have been.

The star, called Scholz’s star, would have passed as close as one light-year from our Solar System. That might seem like a safe distance, but it would have been close enough to alter the orbits of some of the smaller bodies orbiting our Sun. By mapping the orbits of nearly 340 of those objects, the scientists discovered that they were all pulled on by the same large body, which was Scholz’s star.

Scholz’s star, which was named for the astronomer who first detected it, currently sits some 20 light-years away from Earth, but that wasn’t always the case. At just 9% the mass of the Sun, scientists don’t believe the star’s flyby dramatically altered the history of the Solar System or Earth, but its passing would have been an incredible sight for ancient humans. At that time in Earth’s past primitive humans and neanderthals both roamed the land, and seeing the red dwarf star pass by must have been a rather confusing event.

The dim star’s reddish glow would have been easily noticeable in the night sky, though nowhere near as bright as the daytime sun. Still, it would have been pretty neat to see.