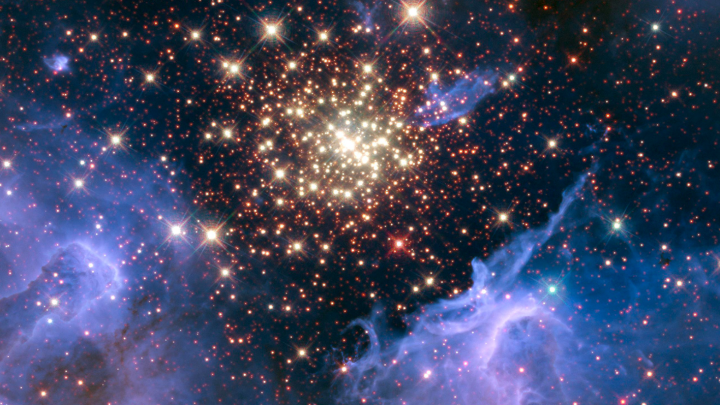 Well, it’s the Fourth of July, which means sunburns, cookouts, and lots of questionable fuses being lit from coast to coast. But whether you’ll be waving some sparklers or going to a full-on professional fireworks show, nothing really compares to the dazzling lights in our own sky.

NASA decided to remind us all of that fact by showcasing a truly breathtaking image of a distant nebula that happens to resemble a classic fireworks display. The massive cluster of stars is called NGC 3603, and what it lacks in a catchy name it more than makes up for with sheer beauty.

The nebula looks pretty from our vantage point, but as NASA is quick to point out, it’s not exactly a friendly place.

“Appearing colorful and serene, this environment is anything but,” NASA writes. “Ultraviolet radiation and violent stellar winds have blown out an enormous cavity in the gas and dust enveloping the cluster. Most of the stars in the cluster were born around the same time but differ in size, mass, temperature and color. These huge stars live fast and die young, burning through their hydrogen fuel quickly and ultimately ending their lives in supernova explosions.”

This particular image was snapped by the Hubble Space Telescope, and it took quite a while to capture it. The telescope peered into this huge star cluster for several months way back in 2009, taking plenty of time to sniff out all the tiny details and ultimately delivering a truly fantastic look at a very active area of space.

“Star clusters like NGC 3603 provide important clues to understanding the origin of massive star formation in the early, distant universe,” NASA says. “Astronomers also use massive clusters to study distant starbursts that occur when galaxies collide, igniting a flurry of star formation. The proximity of NGC 3603 makes it an excellent lab for studying such distant and momentous events.”

It also happens to look really, really cool. So that’s a nice bonus.