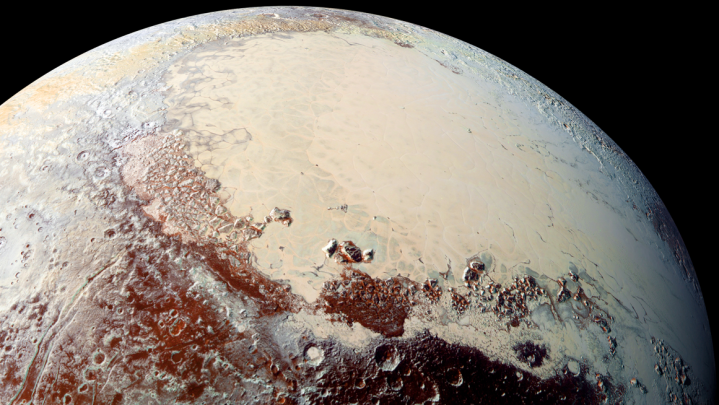 Pluto has had a pretty interesting past few decades. Long considered the ninth official planet, astronomers who redefined what “planet” really means decided to reclassify Pluto in 2006 as a “dwarf planet.” Then in 2015 NASA’s New Horizons spacecraft paid the icy dwarf a visit, giving us a better glimpse of its surface than ever before. Now, a new study into the formation of the planet suggests that Pluto is actually the result of a collision between one billion comets.

The new research, which was published in the journal Icarus, uses the wealth of data gathered by the New Horizons mission to suggest the possibility that Pluto is really just a big ball of crashed comets.

Focusing largely on an area of Pluto known as Sputnik Planitia, the scientists explain that the chemical composition of the region — packed with nitrogen — seems to match up shockingly well with that of a well-studied comet.

That object, known as Comet 67P was the target of a 2004 mission where the Rosetta spacecraft launched and then met up with the icy body as it flew around the sun. The Rosetta spacecraft stayed with the comet for over two years, gathering and incredible amount of data. With that information in hand, the researchers were able to quickly compare the composition of Pluto with the comet, and it would seem they match up well.

“We’ve developed what we call ‘the giant comet’ cosmochemical model of Pluto formation,” Dr. Christopher Glein, lead author of the study, explains. “We found an intriguing consistency between the estimated amount of nitrogen inside the glacier and the amount that would be expected if Pluto was formed by the agglomeration of roughly a billion comets or other Kuiper Belt objects similar in chemical composition to 67P, the comet explored by Rosetta.”

The researchers further suggest that the presence of liquid water may have altered the planet over time, even going so far as to propose that the planet may have had a subsurface ocean. Scientists still don’t know all that much about the dwarf planet’s life, but this new research is a big step in the right direction. Pluto may no longer be an official planet, but it looks like it still has a whole lot of secrets ready to be revealed.