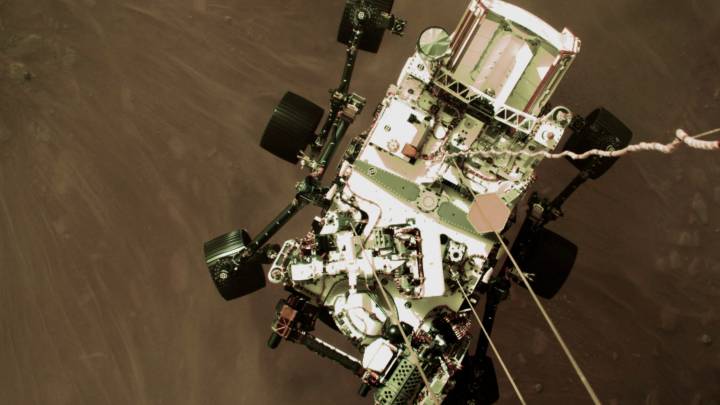 Last week, NASA made history with the landing of the Perseverance rover on the planet Mars. Not only is the rover the most technologically advanced robot ever to be sent to the Red Planet, but its actual landing operation broke some ground of its own. The descent hardware that ensured a soft landing was equipped with a high-resolution camera, and while video from that camera wasn’t immediately available after the landing, it finally made it to NASA in the days that followed, and now we can watch it for ourselves.

This is the first time that a Mars landing has been captured on video in such a way, and it’s a really stunning piece of footage. In it, we get to see the surface of Mars passing by as the rover travels to its landing location, the deployment of the rover, and the touchdown itself. It’s a pretty wild video.

The video, which was posted by NASA on its YouTube channel and also showcased in a media event on Monday, runs for over three minutes, and there’s not a single moment you’d want to miss. Okay, okay, I can hear you screaming at your screen. Here’s the video:

NASA did some pretty interesting things with the footage here, including slowing down the parachute deployment footage so we can see it in slow motion. There’s also a really handy little Mars capsule icon at the bottom of the screen that shows what stage of the landing the spacecraft is in, since it’s not always apparent from what we see via the camera.

I think one of the coolest parts of the video comes when the rover reaches roughly 20 meters from the surface of the planet. At that point, the dust on the surface begins to get kicked up, revealing the rock below and eventually creating a massive cloud that briefly obscures the camera. It’s as close as any of us will probably come to a landing on the planet ourselves, so crank it up to the full 4K resolution and enjoy every second of it.

As cool as the landing is (and it was definitely cool), it’s really just the first step in what will be a years-long exploration mission for the rover. The rugged robot is built to study the surface of the planet and also prepare samples of the Martian soil for future study back on Earth. We can’t wait to see what it finds.