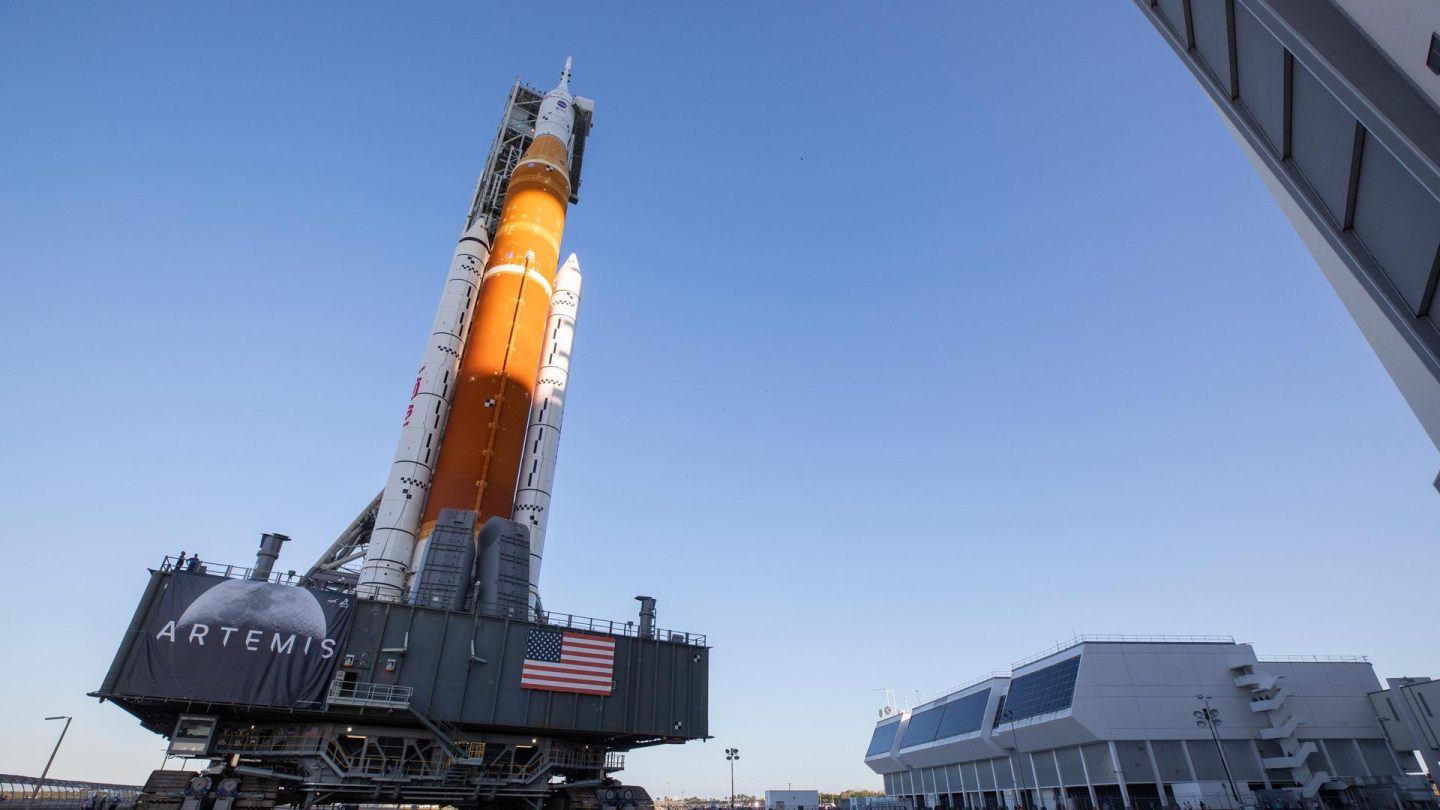 NASA unveiled its new rocket system on Thursday evening. The Artemis I’s rocket system is 322 feet tall, making it taller than the iconic Statue of Liberty. The U.S. space agency unveiled the rocket in preparation for a final test before it launches the 3.5-million-pound spacecraft on its mission to the Moon.

Moving the spacecraft into place

NASA began moving the Space Launch System (SLS) rocket NASA is using for the Artemis missions at around 5 P.M. Thursday evening. The move continued well into the night. NASA took full advantage of the beautiful Florida sky as the sun set over Kennedy Space Center to provide a breathtaking background. The trek itself was only about four miles. Due to the size of the rocket, NASA says it took around 10 hours and 28 minutes hours to complete the journey.

At the launch pad, NASA teams can check the status of the Orion spacecraft. They’ll also be able to connect vital utilities to the Artemis I rocket. These utilities include water for suppressing fires, as well as power and air. After everything is checked, the team will conduct a wet dress rehearsal.

NASA teams will run through the operations to load propellant into the tanks attached to the SLS. They will also go through a full launch countdown and demonstrate how they’ll recycle the countdown and drain the tanks. It’s essentially a chance to practice all the timelines and procedures they will follow at launch, NASA says.

On top of testing the systems and procedures for launch, NASA teams will also practice every possible situation they might encounter, including weather briefings, condition propellants, and even replenishing them if needed. Just before reaching the point of igniting the Artemis I rocket’s RS-25 engines, the launch controllers will recycle back to the T-10 minute point and repeat the process.

The Artemis I rocket is massive and spectacular

Despite being taller than the Statue of Liberty, the SLS acting as Artemis I’s rocket isn’t the tallest system NASA has ever launched. That title goes to Saturn V, the rocket that NASA used under the Apollo Program from 1967 to 1973. That rocket system stood 363-foot tall, a massive beacon of humanity’s push to explore the unknown.

While it isn’t the biggest, the SLS is still an impressive piece of technology. The rocket is attached to NASA’s new Orion spacecraft, which will carry people’s names around the Moon later this year. NASA plans to launch the Artemis I rocket later this year and is shooting for sometime in May.

While the SLS is impressive from a technical and hardware perspective, the importance of the Artemis missions almost overshadows the tech that NASA has developed. These are perhaps some of the most important NASA has undertaken. The main goal of the Artemis I mission is to eventually put the first woman and person of color on the lunar surface.