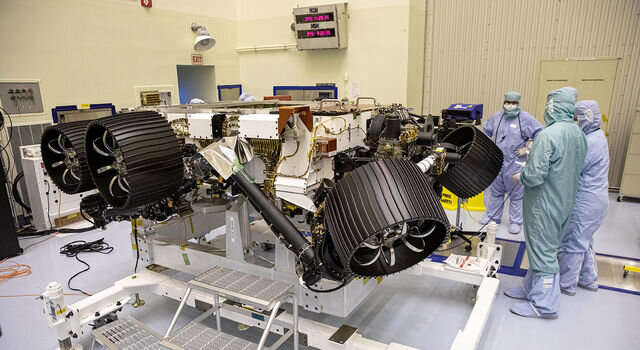 The coronavirus pandemic impacted every business, industry, and government agency in its own unique ways. NASA was no different, but the pandemic popped up at the absolute worst time possible, as the agency was putting the final touches on its Mars 2020 mission and preparing the Perseverance rover for its lengthy tour on the Red Planet.

Missing the launch window would mean pushing the mission back to at least 2022, as there’s only a short time every two years or so that missions from Earth can be launched to Mars. NASA made it a top priority to ensure the Mars 2020 mission wouldn’t be delayed, and it just released a really cool mini-documentary showcasing how it pulled it off.

The brief video focuses on some of the challenges associated with working on a new Mars rover mission even as the world outside is dealing with a global health crisis. Mission-critical personnel still had to do their duties at NASA’s facilities despite most staff being told to work from home.

The good news is that since the Perseverance rover was being built in a clean room — a requirement to ensure that no bacteria or other forms of microscopic life attach themselves to the Mars-bound hardware and accidentally contaminate the planet — the engineers assembling the rover were already outfitted with the most high-end personal protective equipment available.

As the video reveals, not everyone was sold on the name Perseverance for the rover when it was first announced. It’s a fine name, of course, but it took on an even greater meaning when NASA was forced to push through the pandemic in order to ensure the mission could actually get off the ground.

It’s also fitting that NASA has chosen to honor the dedication of healthcare workers that put their lives on the line to treat patients infected with COVID-19 with a special plate installed on the rover itself.

“The safety of the team members became top priority yet they rose to the challenge of completing the rover on time for its launch date, either by working remotely or under new ‘safe at work’ procedures,” NASA explains. “They developed an increased appreciation for the name of the rover and in May they created the COVID-19 Perseverance Plate, which is now mounted on the side of the rover. The plate commemorates all those impacted by the pandemic and pays special tribute to front line health care workers.”