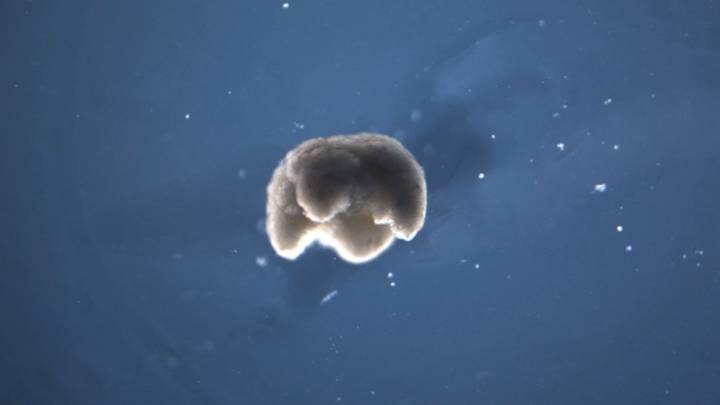 It won’t be long until we start sending fleets of tiny nanobots inside our bodies to deliver medicine  and fix a few of the annoying problems that might otherwise cause irreparable harm and even death. But those robots might not have any metallic components if some researchers have their way. Instead, these fleets of robots capable of traveling through our bodies might be made of something entirely unexpected: Frog cells.

Called xenobots — after the African clawed frog Xenopus laevis — these tiny creatures are made by both man and machine from stem cells. And once inside the human body, they may be able to unclog arteries and prevent that imminent heart attack the doctor has warned you about.

It might be years of research before that happens, but the Universities of Vermont and Tufts have been able to generate these “entirely new life-forms.” Created from frog stem cells, the xenobots are less than a millimeter (0.04 inches) wide, and travel inside blood vessels. They can walk and swim, CNN reports, and they can work alone and in groups.

The stem cells were cut and reshaped into specific body forms to help with a certain task, with a computer helping humans playing god. These supercomputers made beings unseen in nature, the University of Vermont said. The bio-robots have skin and a heart muscle that lets them move around. They can self-heal if needed, and they can feed on certain nutrients and survive inside the host as long as there’s a specific source of food available.

“These are novel living machines,” University of Vermont computer scientist and robotics expert Joshua Bongard said. “They’re neither a traditional robot nor a known species of animal. It’s a new class of artifact: a living, programmable organism.”

These xenobots could have uses in various fields, not just medicine. They could be used to access radioactive areas and clean them up and collect microplastics in oceans. And once they run out of the preloaded lipid and protein food, they’ll just self-destroy without leaving any waste behind. Or, at least, not the kind that you’d associate with nanorobots made of non-biological material.

The theoretical medical uses are more exciting, of course. Aside from unclogging coronary arteries, the robots could be used to explore other conditions. “If we could make 3D biological form on demand, we could repair birth defects, reprogram tumors into normal tissue, regenerate after traumatic injury or degenerative disease, and defeat aging,” the researcher said in an FAQ.

The research was partially funded by the Defense Advanced Research Projects Agency, but that doesn’t mean these xenobots could be weaponized with the help of AI. At least, the researchers say it would be no easy task. “At the moment, though, it is difficult to see how an AI could create harmful organisms any easier than a talented biologist with bad intentions could,” they wrote in the same FAQ. “Despite this, we believe that, as this technology matures, regulation of its use and misuse should be a high priority. Again though, the possibility of misuse is much, much smaller than what is being done with self-reproducing agents like bacteria, viruses, and gene drives.”