NASA does a lot of incredible things, with projects ranging from sending rovers to other planets to launching observatories into orbit around Earth, but not every proposal that NASA likes ends up becoming reality. In fact, many seemingly great ideas have to be set aside due to budget or technological constraints, and oftentimes those ideas are never revisited. For one long-mothballed project, that could change, as astronomers from The University of Texas at Austin found a decade-old concept for a Moon telescope that could ultimately see the light of day.

As the scientists will explain in a new paper to be published in The Astrophysical Journal, a proposal that was originally submitted to NASA back in 2008 for a “Lunar Liquid-Mirror Telescope” or LLMT, may ultimately solve some problems that astronomers are still struggling with today.

The telescope, which is being called the “Ultimately Large Telescope,” would measure 100 meters in diameter and would be installed on the lunar surface. After being built, the observatory would not need to be crewed, as it would be solar-powered and could be controlled remotely, much like the telescopes orbiting Earth today. 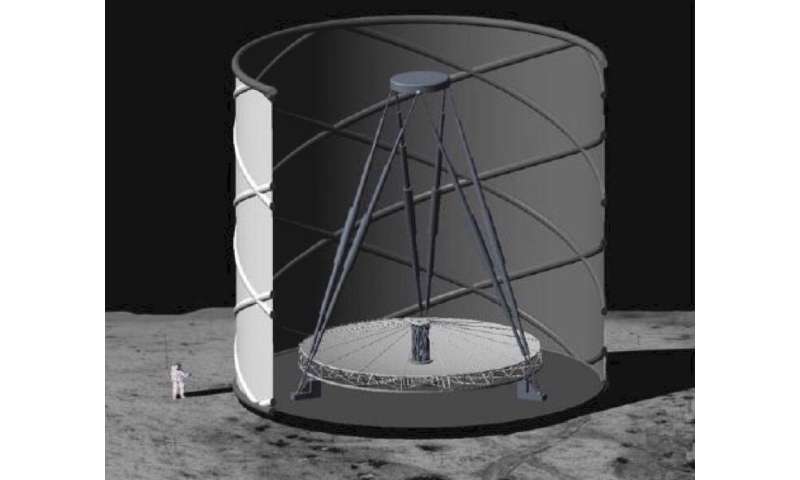 But how do you build a 100-meter wide telescope on the Moon? Hauling such materials to the Moon would be a serious chore, but it gets a bit easier when you use a liquid as the mirror instead of polished glass.

Rather than coated glass, the telescope’s mirror would be made of liquid, as it’s lighter, and thus cheaper, to transport to the Moon. The telescope’s mirror would be a spinning vat of liquid, topped by a metallic—and thus reflective —liquid. (Previous liquid mirror telescopes have used mercury.) The vat would spin continuously, to keep the surface of the liquid in the correct paraboloid shape to work as a mirror.

But why stick a telescope on the Moon at all? Well, a telescope on the Moon with the power of the ULT could potentially peer far enough into space to see some of the very first stars ever created. Because of the nature of how light travels, scientists believe it would be possible to direct the telescope at a fixed point in space and, collecting light over a long period of time, it could detect stars so far away that the light we’re seeing from them originated shortly after the Big Bang.

Now, just because a group of scientists says that the telescope would be beneficial doesn’t mean it will change its fate. NASA would have to take a long, hard look at the decade-old proposal and review it to see if it makes sense. However, with crewed missions to the Moon planned for the near future, it may not be out of the question.