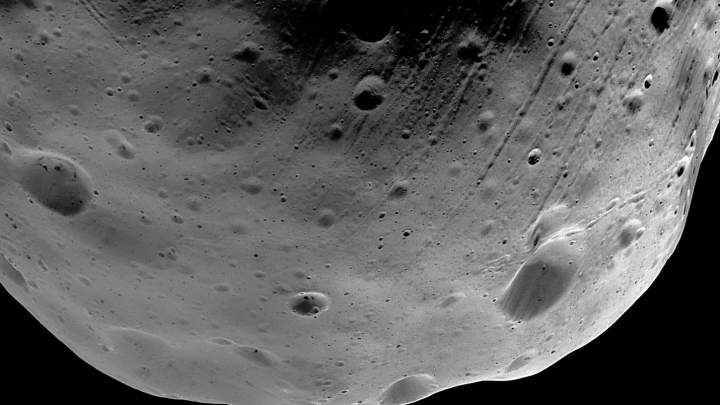 As far as moons go, the Martian moon Phobos is pretty unique. It’s not a frozen ball of ice or covered in toxic hydrocarbons like some of the moons of Saturn and Jupiter, but it has a history that is shrouded in mystery. It’s small, even for a moon, measuring only around 16 miles across, and its oblong shape gives it plenty of personality.

Astronomers have been interested in Phobos for some time. Its physical properties suggest that it’s either a big chunk of Mars itself or a large asteroid that got a little too close to Mars and was drawn in by its gravitational pull. Now, new images from NASA’s Odyssey orbiter are providing us with a look at Phobos through the glassy eyes of an infrared camera.

In order to explain the history of Phobos, scientists have to know what it’s made of. It may be possible to paint a clearer picture of the moon’s history if they can match its composition to that of other asteroids or to Mars itself. Thermal imaging is one way of learning a little bit more about the moon and where it may have come from.

The images, which were captured over the course of several months, offer a look at the heat distribution across the surface of the moon under varying conditions. In some of the images, the moon is shrouded in shadow, while in others it is fully bathed by sunlight. Comparing these images with others captures in the past helps scientists understand how the moon’s surface responds to temperatures and offers a clue as to what Phobos is made of.

“We’re seeing that the surface of Phobos is relatively uniform and made up of very fine-grained materials,” Christopher Edwards, the scientist in charge of processing these new images of Phobos, said in a statement. “These observations are also helping to characterize the composition of Phobos. Future observations will provide a more complete picture of the temperature extremes on the moon’s surface.”

The Odyssey orbiter that captured these images is definitely aging. It’s been surveying Mars since 2001, which is a mighty long time for any spacecraft to remain operational, especially one orbiting a planet other than Earth. The orbiter has been a vital tool for NASA as it continues to send new missions to Mars, and it currently acts as a go-between to send commands to and from NASA’s InSight lander which is currently listening for “Marsquakes.”