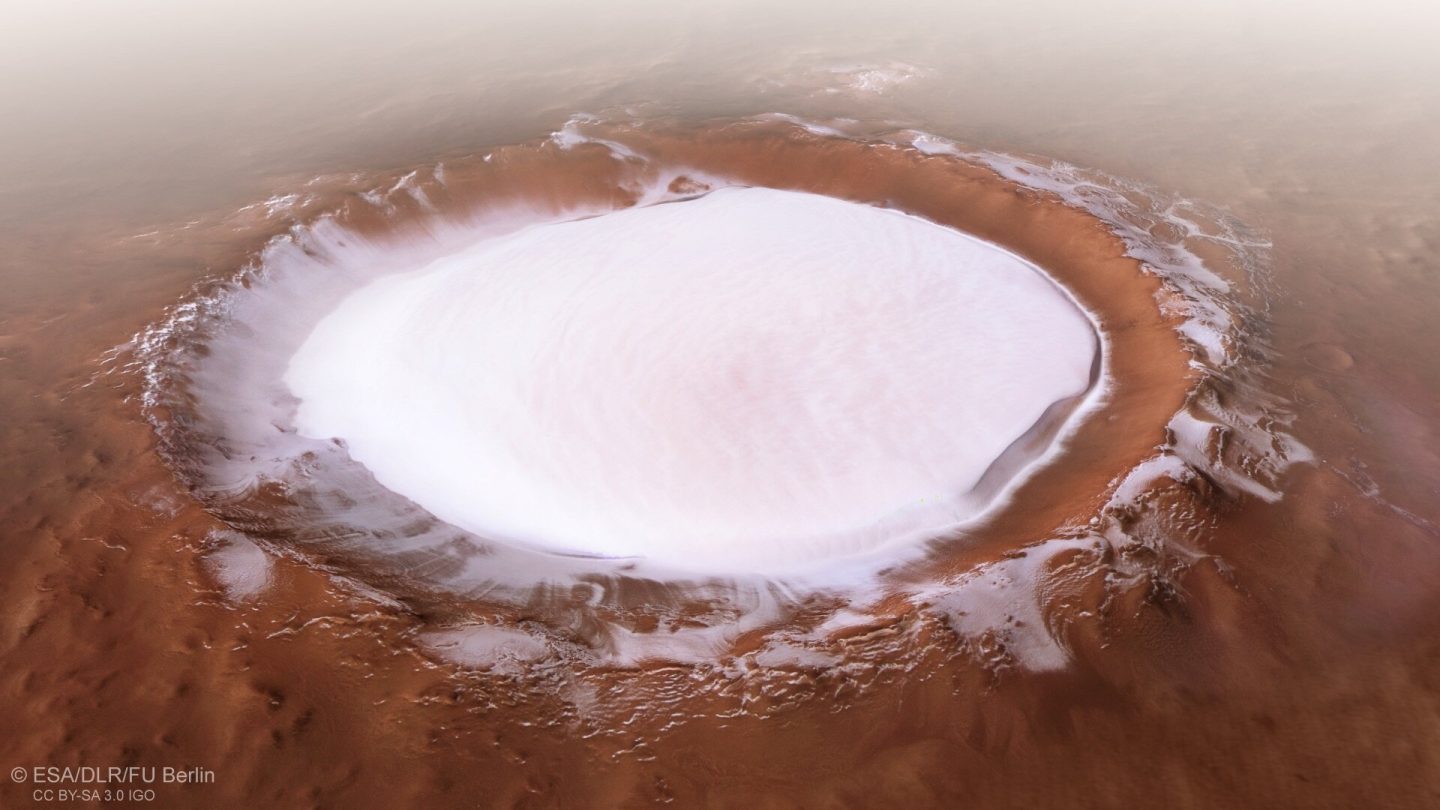 Want to see something totally awesome? Just look above. That’s a Martian lake sitting in the middle of a huge impact crater. Well, at least it would be a lake if Mars was a wee bit warmer and had an atmosphere to protect the water from being whisked away into space.

It’s a massive chunk of ice that measures 50 miles wide and stretches over a mile into the crater itself. On Earth, that would be a nice sized lake but on Mars, it’s been reduced to a frozen disk hiding out on the North Pole of the Red Planet.

Now, using all the images and data the orbiter has gathered of the area, the space agency has put together a really stunning video of a virtual “flyover” of the crater. It offers an even greater sense of scale and really allows you to imagine what it might look like as a watery vacation destination in a parallel version of Mars where the planet retained its atmosphere.

Located in the northern lowlands of the Red Planet, south of the large Olympia Undae dune field that partly surrounds Mars’ north polar cap, this well-preserved impact crater is filled with water ice all year round. The crater’s floor lies two kilometers below its rim, enclosing a 1.8 km thick domed deposit that represents a large reservoir of non-polar ice on Mars.

Water ice is permanently stable within Korolev crater because the deepest part of this depression acts as a natural cold trap. The air above the ice cools and is thus heavier compared to the surrounding air: since air is a poor conductor of heat, the water ice mound is effectively shielded from heating and sublimation.

Crater lakes aren’t uncommon on planets and Moons in our solar system. The same goes for Earth, in fact, which has more than one body of water that can be credited directly to a large impact from an object in space. The colossal Lonar Lake in India is the result of an asteroid impact sometime between 35,000 and 50,000 years ago. It filled with water and then recently turned pink, though scientists are still trying to figure out that last part.

It’s believed that Mars was once just the kind of place you would find flowing rivers and massive lakes. There’s evidence that the planet once had a wealth of liquid water on its surface, and knowing that means scientists are eager to find evidence of past life.