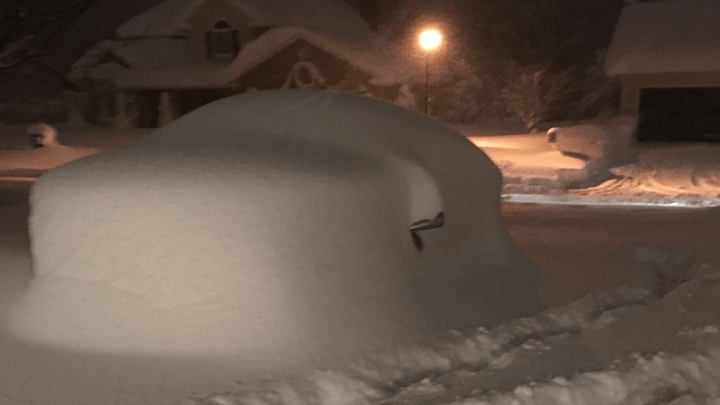 Snow and Christmas go hand-in-hand, but sometimes Mother Nature goes a little over the top. A dusting of the frosty white stuff is fine — even a few inches isn’t a big deal, as long as you have a shovel and a bit of salt to keep it in check — but Erie, Pennsylvania, is dealing with record-breaking snowfall that would bring any city to its knees.

According to the National Weather Service, Erie has endured an incredible 53 inches of snowfall within 30 hours, shattering all previous records and shutting down everything from local businesses to the airport.

Local residents have been taking brief breaks from shoveling their driveways and sidewalks to snap photos of the insanity, and they’re enough to make just about anyone wish for spring.

Record snowfall in Erie today … more than 11 inches of snow and more on the way! #winterwonderland #lakeeffect #Erie pic.twitter.com/UaqI8qQpMf

I grew up in Erie, PA but have never seen snow like we’ve had here in the last 24 hours. It’s crazy that there’s hardly any back in Cleveland right now. Here’s the obligatory patio table photo. pic.twitter.com/13CuOTwnf3

Crazy snow situation in Erie PA. My parents driveway was plowed last night – this is 7a this morning. pic.twitter.com/hPu1WtnanQ

The incredible snow totals are a product of chilly temperatures and lake effect snow sweeping in from Lake Erie. The city was perfectly positioned to receive the brunt of the storm, and while winter storms aren’t anything new for the area, the rapid snowfall still managed to easily break established records. Even with over two dozen snow plows attempting to clear the roads overnight, conditions were still extremely treacherous on Tuesday morning. Unfortunately, most of the trucks were forced to spend the bulk of their time clearing the busiest streets while residential neighborhoods remained snowed in.

Erie has been forced to declare a snow emergency, but even after enduring 53 inches of snow in less than two days, there’s still more on the way. The National Weather Service is forecasting another 8 to 16 inches of snow on Wednesday, which will make for even more insane conditions.