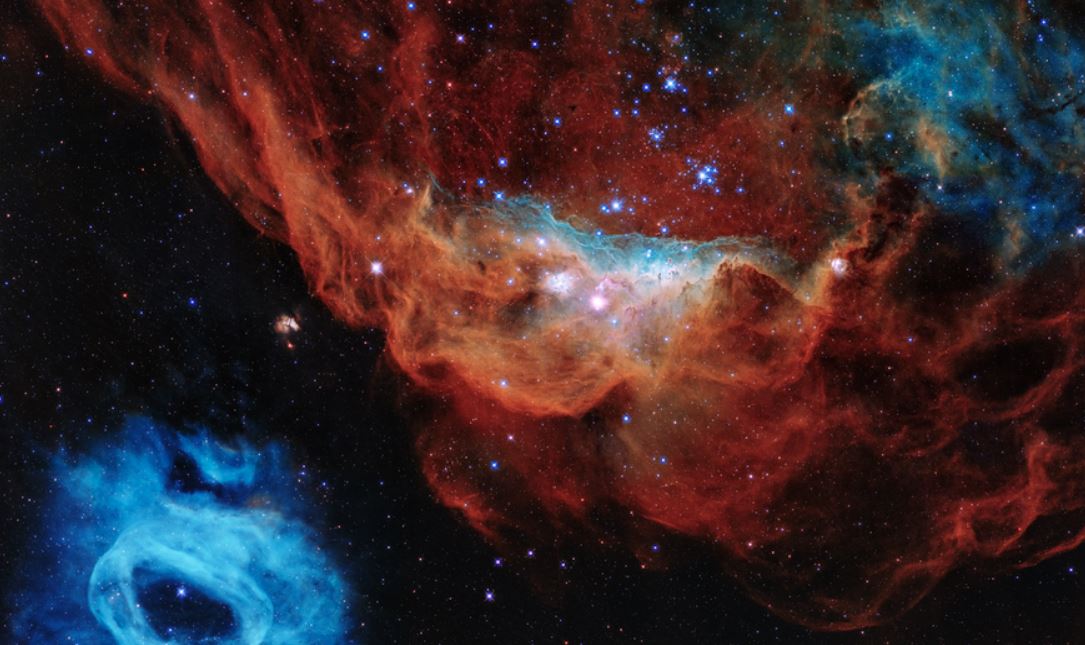 The Hubble Space Telescope is NASA’s workhorse. It was launched way back in 1990 and despite a few hiccups along the way, it’s still going strong in the year 2020. NASA is incredibly proud of all the work it has done and has been working up to the spacecraft’s birthday with some fun retrospectives throughout the month.

Now, on the telescope’s official birthday, April 24th, NASA is showcasing one of its latest images, and it’s definitely a candidate for the most impressive photo Hubble has ever captured. The picture features two nebulas, NGC 2014 and NGC 2020, hanging out in the Large Magellanic Cloud some 163,000 light-years away.

The two nebulas — NGC 2014 is the large red one and NGC 2020 is the smaller blue orb — form what astronomers have nicknamed the “Cosmic Reef” because its colorful, surreal appearance resembles what you might find beneath the waves of the ocean.

Images like this of a distant, volatile region of space where new stars are born out of masses of gas and dust are incredible examples of just how important Hubble is not only to science but to science fans around the world.

“Hubble has given us stunning insights about the universe, from nearby planets to the farthest galaxies we have seen so far,” NASA’s Thomas Zurbuchen said in a statement. “It was revolutionary to launch such a large telescope 30 years ago, and this astronomy powerhouse is still delivering revolutionary science today. Its spectacular images have captured the imagination for decades, and will continue to inspire humanity for years to come.”

As NASA explains in a new blog post celebrating the photo and the telescope’s 30th birthday, Hubble has made over 1.4 million observations during its lengthy tenure in space. With that wealth of data about the cosmos, researchers have produced over 17,000 peer-reviewed papers on all manner of cosmic interest. Even if the telescope were to be shut down today, the amount of data it has already sent back to Earth will continue to yield new discoveries for decades.

But Hubble isn’t done. The aging telescope may old by today’s technological standards, but it’s still capable of amazing things, and NASA and the European Space Agency see no reason to shut it down just yet. Estimates suggest that the telescope could remain operational for up to another decade, and with it still producing images like the Cosmic Reef, we’re in no rush to see its mission end.