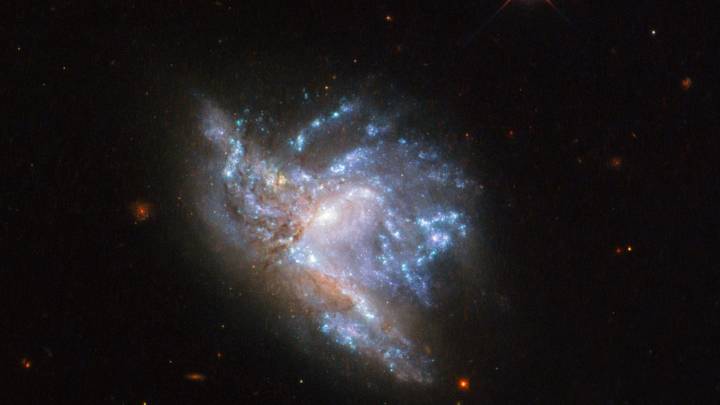 As Earthlings, the kind of space collision we typically fear the most is one between an asteroid and our home planet. Depending on the size of the rock, it could be devastating to to the human race, but as far as the universe is concerned the utter destruction of Earth would be nothing more than a tiny, insignificant footnote.

When it comes to things crashing into each other in space, galaxy collisions are really where the big things happen. NASA’s trusty Hubble Space Telescope just captured a gorgeous view of two large galaxies that got a little too close for comfort.

NASA describes what we’re seeing in the image as such:

Located in the constellation of Hercules, about 230 million light-years away, NGC 6052 is a pair of colliding galaxies. They were first discovered in 1784 by William Herschel and were originally classified as a single irregular galaxy because of their odd shape. However, we now know that NGC 6052 actually consists of two galaxies that are in the process of colliding.

A lot of very interesting things happen when galaxies collide, not least of which is the unpredictable future for the stars and planets that call each galaxy home. Stars within the galaxies may be pushed or pulled into new trajectories based on their rapidly-shifting surroundings.

As NASA explains in a new blog post showcasing the image, the stars and planets that make up the galaxies usually have pretty good odds of surviving the merger. Galaxies are largely made up of empty space, and there’s typically enough distance between stars that the two groups can settle into a single galaxy arrangement without risking the destruction of many stars.

Our own Milky Way is headed for a collision of its own. In around four billion years the Milky Way is expected to collide with the Andromeda galaxy. You have to assume that by that point mankind will have either destroyed the Earth and ourselves, but maybe there’s a slim chance that we make a go of it and have spread to new planets and perhaps even other star systems.