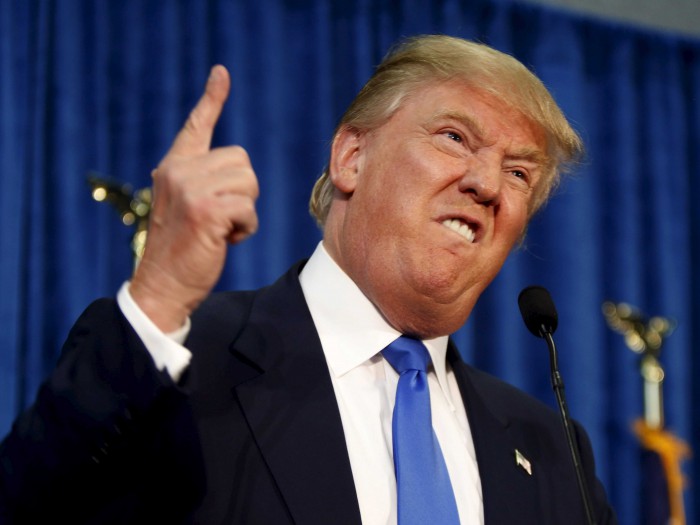 If you’ve ever spent enough time on Twitter, you’ve probably encountered a truly obnoxious person who can only argue by lobbing personal insults at you and who delights in offending everyone by making racist and sexist statements. We typically think of these people as loser trolls who lead miserable, lonely lives. But what happens when one of them happens to be a doughy stubby-fingered billionaire who could soon become the president of the United States?

That’s basically what we’re seeing right now with Donald Trump, who has essentially become Lord of the Trolls on Twitter and who can command an army of similarly foul-mouthed racists to swarm anyone else on the social network whom he believes deserves punishment.

FROM EARLIER: Netflix just stepped up efforts to block VPN users from streaming its content

The New York Times today has an interesting report on what happens to you on Twitter if Trump directs one of his insults at you. In short, your feed becomes overwhelmed by horrible people who say horrible things about you.

In this case, it was Republican political strategist Cheri Jacobus who felt the wrath of Trump’s fans after criticizing his decision to skip a presidential debate in Iowa.

“For days, [Trump fans] replied to his posts with demeaning, often sexually charged insults aimed at Ms. Jacobus, including several with altered, vulgar photographs of her face,” the Times writes.

The report goes on to note that Trump will typically go out of his way to mock an opponent’s physical characteristics, despite the fact that Trump’s own face looks like a pug that’s been smashed with an iron for a straight week. This gives his own legion of Twitter trolls material that they can use to taunt his target relentlessly. If you’re a woman, they also regularly claim that you only dislike Trump because he turned you down for sex.

Trump also this week posted a mafia-style threat against a powerful GOP donor family whom rumors had claimed would soon start spending money to campaign against him:

Really, it’s wonderful to imagine what would happen if we made a person like this the most powerful man in the world. I imagine him sending out a tweet after a meeting with Angela Merkel that referred to the German chancellor as a “bimbo” who had “blood coming out of her wherever.” This would certainly make America something, although “great” is not the word that readily comes to mind.