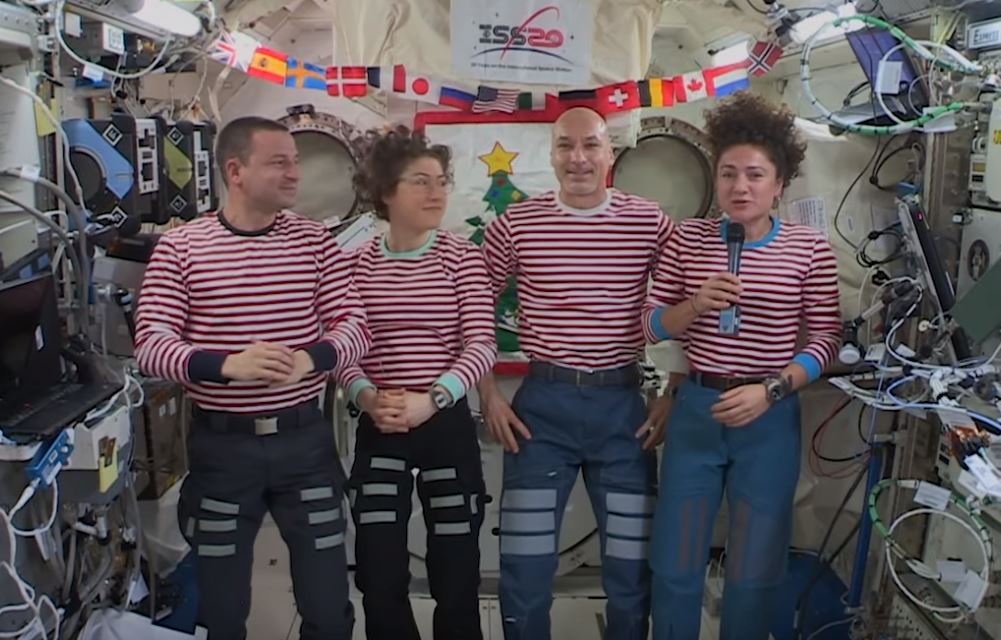 The holidays have finally hit a fever pitch, and with Christmas day on the horizon, it’s as good a time as any for the astronauts aboard the International Space Station to send down some warm holiday wishes for the rest of us Earthlings.

In a new video published by NASA, astronauts Christina Koch, Drew Morgan, and Jessica Meir are joined by mission commander Luca Parmitano of the European Space Agency, and the group shows off how they’ll be celebrating the big day in space.

The video, which is about three minutes long, offers a lovely look inside the space station and includes all four astronauts in some seriously festive holiday garb. The crew shows off their holiday stockings and offer their own perspectives on what it means to spend a family-focused holiday in space, even as their families gather back on Earth.

As for how the astronauts will actually be celebrating the big day, a special holiday meal is in order. Noting that the crew had turkey for dinner on Thanksgiving, Morgan reveals that Christmas dinner will include smoked salmon. That sounds pretty great, but there’s a small downside, at least for the astronauts who can’t stomach fruitcake.

“We had to come all the way to space to try to get away from fruitcake… but it didn’t work,” Koch bemoans. “We got some anyway.”

There will also be some hot apple cider and hot cocoa, both of which come in metallic-looking pouches. It might not be the fanciest meal ever, but when you’re drifting through space at nearly five miles per second, you have to work with what you have available.

The current ISS expedition, Expedition 61, officially began on October 3rd. These missions stretch on for months, and the crew of Expedition 61 has already accomplished a lot. The team has carried out a number of repairs on the exterior of the space station and installed new components that will ensure the future operation of the spacecraft far into the future.