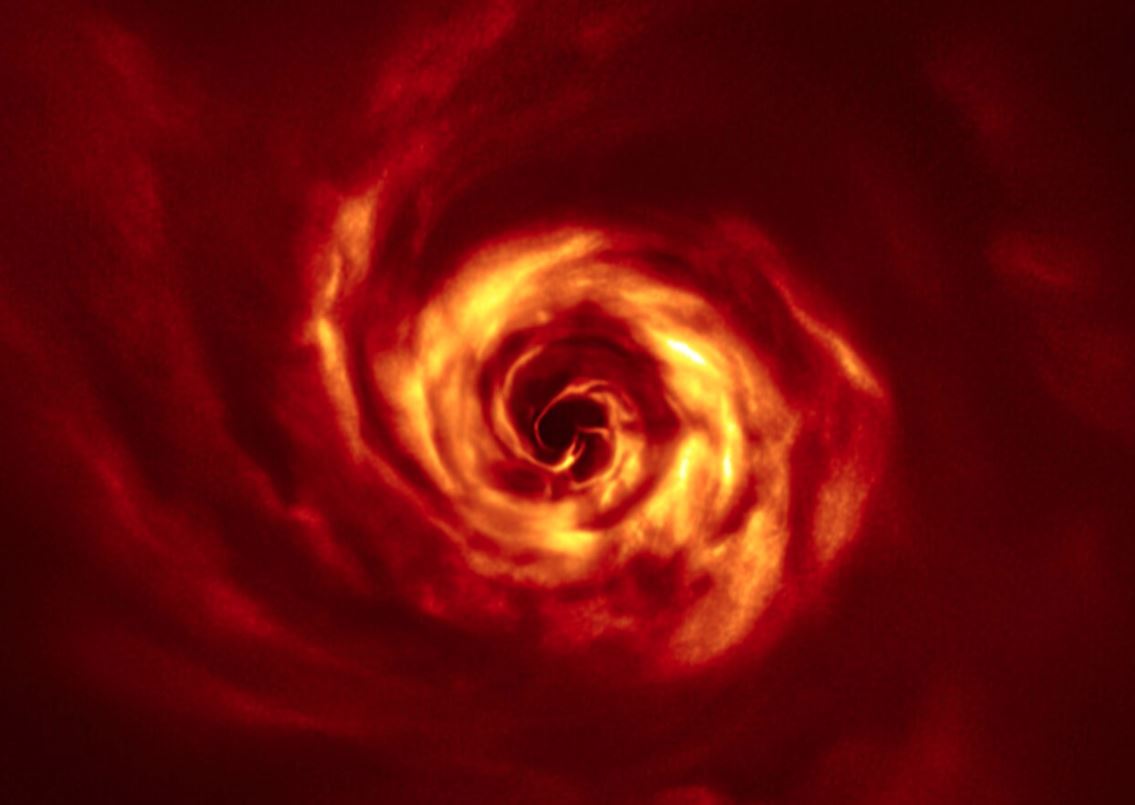 Planets don’t just pop out of nowhere. They can form in different ways but one thing is consistent about all of them: All the matter that makes up a planet was, at some point in the past, drifting free of all the other particles that now surround it.

Now, astronomers using the European Southern Observatory’s Very Large Telescope have spotted what they think is a planet in the midst of being born. A central point in a swirling mass of dust and gas, it may be the first baby planet ever spotted by humans.

As ESO explains in a new blog post, the mass of material was spotted orbiting a young star called AB Aurigae. The planet-in-progress looks like a giant storm in space, but it’s actually a collection of matter slowly coalescing into a solid form. Or, at least that’s what astronomers are hoping for.

“Thousands of exoplanets have been identified so far, but little is known about how they form,” Anthony Boccaletti, lead author of a paper on the discovery published in the journal Astronomy and Astrophysics, said in a statement. “We need to observe very young systems to really capture the moment when planets form.”

The Very Large Telescope may have allowed scientists to see that very thing, though it’s hard to know for sure. Some models of planet formation have hinted at the possibility of twisting, swirling shapes that precede the birth of a baby planet. It makes sense, according to the researchers.

“The twist is expected from some theoretical models of planet formation,” Anne Dutrey, co-author of the work, explains. “It corresponds to the connection of two spirals — one winding inwards of the planet’s orbit, the other expanding outwards — which join at the planet location. They allow gas and dust from the disc to accrete onto the forming planet and make it grow.”

Eventually, all or nearly all of the matter swirling in space around the central point will become part of the new planet. This process is believed to take billions of years, so we’re not likely to catch a glimpse of the final product in our lifetimes. Still, it’s incredible to see it in its current state.

Going forward, the researchers note that the Extremely Large Telescope (don’t you just love these naming conventions?) that is currently in development will offer an even clearer look at exoplanets, and perhaps give us a better idea of exactly what is happening with this particular baby planet.