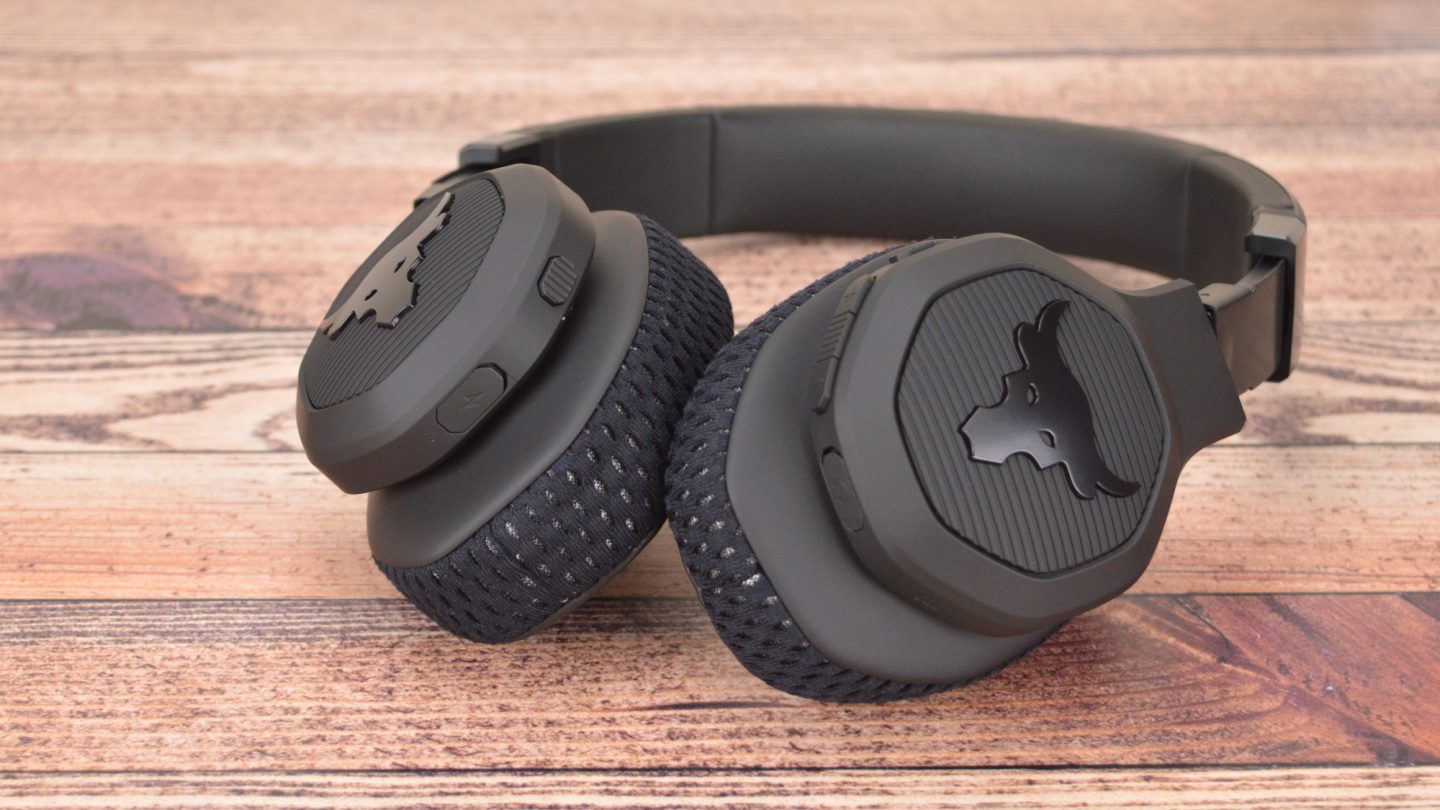 Developing a great pair of sports headphones can be tricky. Not only do sports headphones have to be tough, but they also have to offer a good clamp and perhaps some sweat resistance. JBL and Under Armour think they’ve cracked the code — and have together partnered with The Rock on a new pair of headphones — the JBL UA Project Rock headphones.

The name is a mouthful to say the least, but that’s to be expected when you have to cram three entities into it. More important than the name, however, is how the headphones perform. Can the JBL UA Project Rock make a serious case for over-ear workout headphones? I’ve been testing them to find out.

These headphones offer an all-black look, but they’re not necessarily boring-looking at all. You’ll get a logo of The Rock’s iconic bull tattoo on each ear cup, a fabric sweat-proof ear cushion, and a generally rugged look.

There are a range of buttons and port-covers dotted around the headphones. On the left ear cup, you’ll get button to trigger your preferred voice assistant, along with a cover for the USB-C port. On the right ear cup, there’a a power switch, playback controls, and a cover for the aux port for wired listening.

The bull logo on the right cup is also a button. This button controls noise cancelation modes, allowing you to switch between noise cancelation, ambient noise, and Talkthru mode. Its nice that the control for this has been moved away from the edges, considering how many controls are already there.

Because these are sports headphones, you might sweat a lot with them. Thankfully, you can still clean them — the ear cushions are removable, and washable. It’s a nice touch — though make sure to hand wash them only.

For the most part, the JBL Under Armour Project Rock headphones feel like they’re made with relatively premium materials. The ear cups are made from a rubberized plastic, and while the only metal in the construction is in the headband, they didn’t feel like they would break.

In the box, apart from the headphones themselves, you’ll get a nice carry case, a charging case, and an aux cable. It’s pretty much everything you’ll need.

The headphones offer a few different features to help make them smarter and more helpful. Notably, they connect to the JBL Headphones app, which allows you to control things like noise cancelation, and tweak the EQ. The Rock himself has created his own EQ profile, but you can change it to your own preferred EQ. Or, simply turn the EQ off and have the default sound.

The app also offers some other customizations. You can change the function button, select your preferred voice assistant, and more. They’re no AirPods — but the headphones offer plenty of helpful features.

The JBL UA Project Rock headphones aren’t the most comfortable cans out there, and unfortunately it does have an impact on their overall usage. The headphones offer more than enough padding in the ear cups, however the ear cups are slightly too small for my ears — so they pinch them a little when wearing. When wearing them for an hour or two, this wasn’t an issue. But any longer, and it starts getting a little uncomfortable.

The headband is a point of discomfort too. There’s little padding under the headband, and the surface covering it is rubberized. The result is that they feel a little hard on the top of your head, and occasionally feel like they’re pulling your hair. I suppose this isn’t an issue for The Rock.

The JBL UA Project Rock headphones aren’t all that comfortable, but thankfully, they sound pretty good. Notably, there’s plenty of bass to go around, along with good clarity in the high end. The Rock’s custom EQ pumps up the bass, however it was a little much for me so I stuck with my own EQ some of the time, and just had the EQ turned off the rest of the time.

Bass response, as mentioned, is relatively deep and powerful, allowing kick drums to hit straight through a mix.

Mid frequencies are decently tuned, though with the custom EQ enabled, I pulled them back a little. Vocals generally have plenty of meat to them, while guitars offer enough cut to sound front-and-center. Again, some EQ tweaking will help the mids sound a little more natural, but you can play with that depending on your preferences.

The highs sound pretty good, however a little more high-end extension would have been nice. In other words, there’s good clarity, and cymbals shimmer nicely, but they could shimmer a little more. I’m nit-picking though — the highs are good for a pair of headphones in this price range.

The noise cancelation tech on offer here is pretty good too. It’s not only the level of the Sony WH-1000XM4 headphones, unfortunately, despite the fact that they’re only $50 cheaper. But it can cut out some noise, which could come in handy in the gym.

The JBL UA Project Rock over-ear headphones have a lot going for them. The rugged design, solid audio quality, and excellent battery life definitely makes them a decent pick in this price range. They are let down a little by a generally uncomfortable fit, but if you plan on using these for an hour or two per day in the gym, you won’t really notice it all that much.

Ultimately, if you’re looking for a pair of noise-canceling headphones in the $300 price range, you should get the Sony WH-1000XM4 headphones on sale. But those aren’t necessarily the best headphones to get for those that want to work out with their headphones. In that case, we recommend something like the Beats Studio3 Wireless headphones, or Plantronics BackBeat 810 Wireless.

Should I buy the JBL Under Armour Project Rock headphones?

Yes, but only if a rugged design is important to you. Otherwise, you should go for something else.

jbl The Rock Under Armour