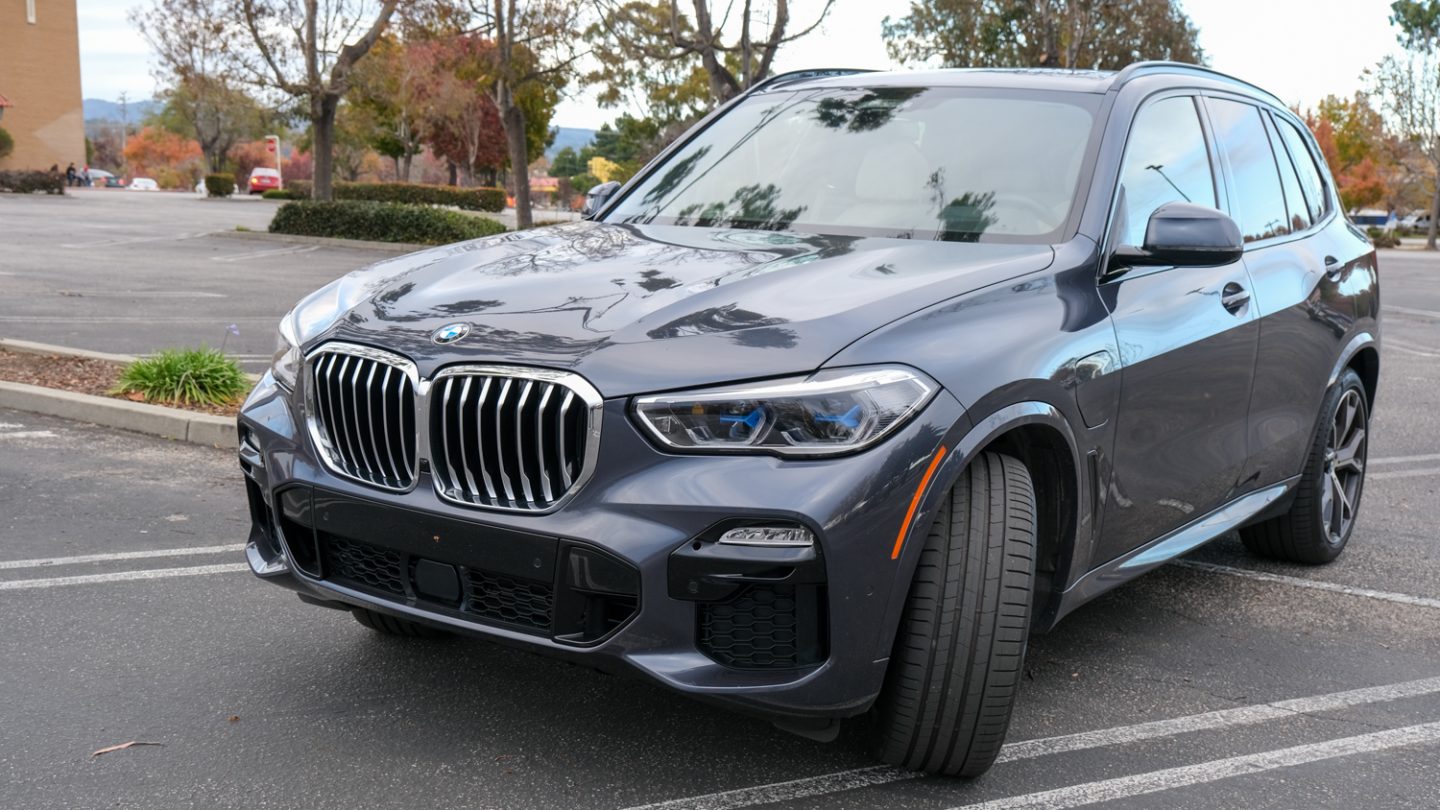 While the car world is finally making the big shift to electric, not everyone is willing or even able to make the jump. If you don’t want a Tesla, going electric means having to contend with a pretty sub-par charging infrastructure, and while that infrastructure is getting better, that doesn’t really change the here and now. That, however, is where a plug-in hybrid comes in, like the BMW X5 xDrive45e.

The BMW X5 is a luxury SUV, with this 45e model, being an upgrade of the last-generation xDrive40e that BMW offered in the past. It offers a better electric range, faster acceleration, and a range of features, both optional and included, that make the driving experience better than ever.

But at a starting price of a little over $65,000 for the base model of the xDrive45e, is it worth the cash, given how popular and readily available SUVs are these days? I’ve been using the BMW X5 xDrive45e 2021 to find out.

The BMW X5 has long been a popular car among luxury SUV shoppers, and it’s immediately easy to see why. The car has a handsome exterior, with luxurious accents and a sporty feel. It has avoided the oversized grille on offer by some of BMW’s other cars so far, instead boasting a kidney grille that looks just about the perfect size for the car.

On the front, apart from the aforementioned grille, you’ll find BMW’s sleek laser LED lights. They get incredibly bright and give the car a sportier look. We’re reviewing the car in an Arctic Grey Metallic finish, which has become synonymous with BMW over the years. It looks stunning.

Of course, while the base model of the xDrive45e looks great, add a few options and it’ll look even better. Our model has the M Sport Package, with the 21-inch Y-spoke wheels, which have that blue brake caliper accent too. It’s a good look, though not everyone will find it worth the extra cash.

Generally speaking, the BMW X5 xDrive45e is a luxurious-looking car with a sleek yet somewhat subdued exterior. It’s not over-the-top — and I appreciate that.

The interior of the car continues the theme of luxury. The car is outfitted with soft-touch leather throughout, beautiful, customizable accent lighting, and a ton of storage space for those long road trips.

Both the driver and the passengers have a ton of control over their comfort level and overall experience. The rear passengers, for example, have a sunshade that can cover their windows. They also get individually adjustable climate controls and a USB-C port for phone charging. The driver and front passengers also get plenty of seat controls.

The accent lighting in this car deserves its own section. Of course, we’re spoiled with the executive package, which adds things like the LED lighting build into the panoramic sky roof. It looks great, and you can tweak the colors in the settings of the car.

At the back of the car, you’ll get plenty of storage. The X5 xDrive45e has a cargo cover, along with a cool double hatch that makes it easy to load larger objects into the car. The car even has a button to lower the air suspension. That makes it that extra bit easier to access the trunk. And, there are buttons on the inside to easily lower the rear seats. It’s all very easy and intuitive — perfect for carrying larger loads.

Under the floor of the trunk is where you’ll find your portable charging cable, which can plug into a regular power outlet.

The instrument cluster and controls at the front are pretty easy to access and look great. You’ll get the ability to easily change driving modes, and control the software with a physical dial instead of the touch screen, if you so choose. There’s a good amount of storage at the front too, with a single wireless charger.

As someone who reviewed the BMW 330e, the infotainment was immediately familiar to me. But even those that don’t have experience with the iDrive system will be able to appreciate it — it’s easy to use, and as long as you spend a few minutes familiarizing yourself with the settings when you first get the car, there shouldn’t be too many bad surprises.

The car supports both Android Auto and Apple CarPlay through a wireless connection, and it worked flawlessly in my use. Alternatively, if you prefer to stick with BMW’s own infotainment system, you’ll get a few benefits.

For starters, the car has a heads-up display, with the Executive package. With CarPlay, it can show your speed and the speed limit. However, if you use BMW’s mapping, it can also show directions and a little map where appropriate. It’s a very cool touch and something that I really enjoyed using.

Of course, as is usually the case, BMW’s mapping and infotainment isn’t really as well-designed as services like CarPlay and Android Auto. BMW has a long way to go when it comes to software design and development. Thankfully it’s still relatively easy to navigate though.

The instrument cluster, which is really just another display, is relatively well-designed. Depending on the mode you’re driving in, you’ll get information like the amount of gas left, how much juice is left in the battery, and even some mapping integration. The cluster also serves as a way to tell you when you’re using the engine and when you’re running off the electric motor. And, you’ll be able to tell when you’re charging using regenerative braking. It’s nice to be able to see all of this information in one place. That’s especially true if you want to mostly use the car’s battery to drive.

The BMW X5 xDrive45e comes with a number of safety and driver-assist features and could come in handy. Some of these are available in the base model, most of them come as part of optional packages.

For example, there’s the Driving Assistance Professional Package. This adds BMW’s camera and radar-based features, including a lane-keeping system, emergency stop assistant, and more. The lane-keeping system did work relatively well in our use. And, with the adaptive cruise control, you’re approaching self-driving on the highways. There’s also the Parking Assistance Package, which can automatically park the car. That comes in handy when parallel parking.

I do feel like at least some of these features should be available in the base model. Hopefully over time they’ll stop costing extra. I get that at this point in time, things like lane-keeping require extra sensors. But as we head towards a world of self-driving, many customers will need to be eased into letting their car handle more and more, and including features like lane-keeping will help with that.

The BMW X5 xDrive45e may be an SUV, but it feels sporty, handles with ease, and is generally a pleasure to drive. The car is zippy when you need it to be, and makes it easy to switch between modes as needed, or simply let the car decide for you.

Speaking of modes, there are three main ones — Hybrid, Electric, and Sport. Each feels and reacts a little differently, and the way you use them will likely largely depend on if and when you plan on charging your car. Hybrid is the default mode. It basically involves the car itself figuring out what the most efficient way to drive is. In Hybrid, you’ll find yourself mainly using the electric motor at lower speeds, and having the gas engine kick in on the highway. In Electric, you can get up to speeds of 84mph, but won’t be able to accelerate quite as fast as the other modes. Sport prioritizes power, and can get you from 0 to 60 in 5.3 seconds. Generally, I stuck with Hybrid mode.

Of course, there’s even more customization that you can do. There’s a Battery Control mode, which prioritizes using regenerative braking to charge the battery to a certain level. And, there’s Adaptive Mode, which dynamically adjusts things like throttle sensitivity and steering on the fly. It all sounds like a lot to wrap your head around, but you’ll probably find yourself sticking to one or two modes in day-to-day use.

Under the hood, the car has a 3.0-liter 6-cylinder engine, coupled with a 24-kilowatt-hour battery that can deliver up to 30 miles of range. Together, you’ll get 389 horsepower, and it has an eight-speed transmission. The 30-mile range on the battery isn’t terrible, and will be perfectly fine for those who plan on mostly using the car to drive to work and back. That said, I would be lying if I didn’t want a longer-range battery.

The ride quality on the car is excellent. With the air suspension, the driving experience is generally very smooth, and while at times you can feel the car’s weight compared to something like the 330e, it never felt unwieldy.

The BMW X5 xDrive45e is arguably the best in its class. This is the SUV for those who want a little luxury, and aren’t willing to go fully electric just yet. It’s comfortable, drives like a dream, and offers plenty of features for those who like a little extra.

But if you are willing to bend a little towards an all electric-experience, it may be worth doing so. There are tons of electric SUVs out there these days — from the Telsa Model Y, to the Ford Mustang Mach-E, to BMW’s own iX. They vary widely in price, but even the base price of the X5 could get you a solid electric SUV.

If you like the idea of a plug-in hybrid, there aren’t a ton of options out there. As far as luxury plug-in hybrid SUVs go, this is probably the best. But it’s also worth considering the Volvo XC90, and if you’re willing to spend a little, the Porsche Cayenne. Both of these cars offer a hybrid option.

Yes. If you want a luxury plug-in hybrid, this is an excellent option.