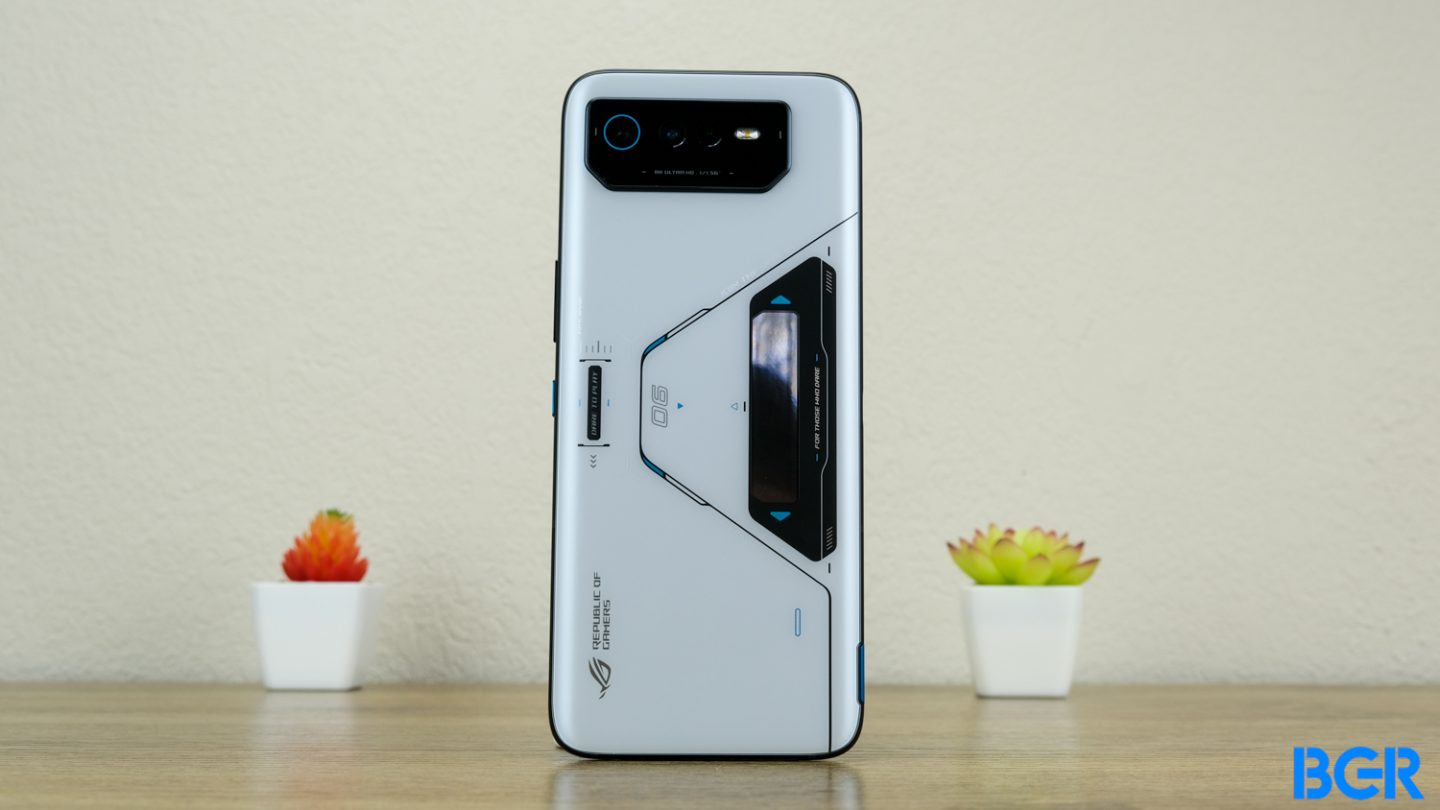 Gaming phones are a bit of a weird niche, especially these days. With game-streaming on the rise, it’s easier than ever to play high-end games without needing a powerful device. But companies seem to keep plugging along in building so-called gaming phones — and honestly, I’m glad. The term “gaming phone” or “gaming PC” often translates to “extremely powerful device,” as is the case with the new Asus ROG Phone 6 and ROG Phone 6 Pro.

The ROG Phone 6 takes what was great about the ROG Phone 5 and makes it even better. It has the latest-gen Qualcomm processor, the Snapdragon 8+ Gen 1, a high-end display, and a small ecosystem of accessories that you can use for gaming. But the device is also more expensive than many alternatives.

The Asus ROG Phone 6 Pro builds on last-generation with incredible performance and a good software experience. 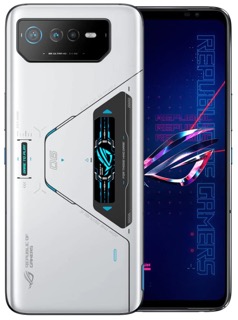 The ROG Phone 6 is far from subtle about being built for gamers. It’s big, bright, and full of interesting design elements.

The front of the device is the least interesting, so lets start there — there’s a big display with a small forehead that hides the front-facing camera, and an equally-sized chin. The back is where things get a little more interesting though. You’ll find a triple-camera array in a hexagonal cutout, a few logos, and Asus’ ROG Vision display. That display is two inches, and when X Mode is activated, can show things like “Game Start!” when you start playing a game, or cool graphics when you’re not playing. That display turns off when the main screen is off, to help preserve battery. On the standard ROG Phone 6, you won’t get this secondary display.

Even the edges are a little…weird. On the right edge is a power button and volume rocker, and on the bottom is a headphone jack and off-center USB-C port. Then you get to the left edge and there’s…another USB-C port. Like the bottom one, it can be used for charging — but it can also be used to connect accessories, like the AeroActive Cooler 6 and the Kunai Controller 3. We’ll get into those accessories more a little later.

While the standard Asus ROG Phone 6 comes in two colors, you can only get the Pro in the Storm White option. Some may find this annoying, but I like the white model.

Generally, I quite like the Asus ROG Phone 6 Pro’s design. It’s certainly not for everyone, but I appreciate when companies stray from the black-and-gray flat designs that are found on the vast majority of devices these days.

The screen on the Asus ROG Phone 6 Pro is, as the name suggests, Pro. It does have a 1080p resolution, but that’s not really a huge issue. Especially considering the fact that Samsung has custom-made the display for this phone with a 165Hz refresh rate and a hefty 720Hz touch sample rate. That’s not to mention the fact that the screen gets incredibly bright — up to 1200 nits peak brightness. In other words, it’s always easy to see the screen, even in direct sunlight.

Generally, the display looks awesome. The dynamic refresh rate can refresh between 60Hz and 165Hz depending on what you’re doing by default, though you can set it to remain at a specific refresh rate. Unless you want to limit it to a lower refresh rate for battery purposes, I recommend leaving it at Auto.

ASUS is seriously emphasizing audio for the ROG Phone 6 and 6 Pro too. For starters, the phone has two front-facing speakers that can not only get incredibly loud, but also sound crisp and detailed, for a pair of phone speakers. They’re among the better phone speakers out there, so if you regularly use your phone’s built-in speakers, you’ll love what’s on offer here. They’re also built to be a little more immersive, with Dirac Virtuo spatial audio, and while it’s good, for a really immersive experience you’ll want to use headphones.

Much of the speaker quality comes from Swedish company Dirac, which worked with Asus to tune the speakers for superior performance. It’s hard to know exactly what Asus did versus what Dirac did, but indeed the speakers do sound great.

Performance is one area where this phone really shines. As mentioned, the device comes with the Qualcomm Snapdragon 8+ Gen 1, which is coupled with a massive 18GB (not a typo) on the ROG Phone 6 Pro. You’ll also get an impressive 512GB of storage, which should be plenty for even the heavier mobile gamers — and there’s a microSD card slot for those that don’t find it to be enough.

In day to day use, the ROH Phone 6 Pro absolutely flies. When you’re not gaming, it easily handles all your multitasking and productivity needs, seamlessly switching from app to app, and never freezing or stuttering for a second. When you do fire up those games, it loads quickly, and reacts smoothly to input while retaining a good frame-rate.

Benchmarks confirm the excellent performance. The device achieved the following benchmark results, without the cooling accessory.

These results are beaten only by the iPhone, which routinely outperforms most Android phones. Among Android phones, the Asus ROG Phone 6 Pro is among the best-performing.

Gaming can take up a lot of battery-power, but thankfully the Asus ROG Phone 6 is a battery champ. The device comes with a huge 6,000mAh battery, and it’s able to power the phone for hours of gameplay, or literal days of non gameplay. I found that gaming on the phone for an hour or so (mostly playing Genshin Impact) left me with more than 85% remaining.

Much of how much battery you have left will have to do with the mode you use when you game. We’ll get into the different performance modes later, but the basic gist is that you can tune how your phone will perform based on how much you want to prioritize performance, battery, and so on.

After a day of normal use I normally still had well above 50% of the battery remaining — meaning that as someone who charges their phone overnight, I was never worried about running out during the day.

When you do want to charge your phone, you can do so extremely quickly. The device charges at up tp 65W with the included charger, and it’ll take well under an hour to full charge the battery. Unfortunately, there’s no wireless charging here.

The Asus ROG Phone 6 Pro is built more for gaming than a great camera experience, but while the device won’t really compete with the likes of the iPhone 14 Pro and Pixel 7 Pro, it still captures decent photos.

On the back of the phone, you’ll get three cameras. Those include one 50-megapixel main camera, one 13-megapixel ultrawide camera, and one 5-megapixel macro camera. Unfortunately there’s no telephoto camera here, which you would want in a phone this expensive. Hopefully Asus will fix that next time around.

Still, the camera is able to capture solid photos. Detail is generally pretty good, and colors are vibrant and bright — or vibrant and bright enough. It’s not necessarily the most versatile, nor the most consistent camera. If you’re spending this much on a phone and want among the best camera experiences, it’s best to look elsewhere. But if the camera is of lesser importance to you, you’ll be happy with the Asus ROG Phone 6 Pro.

At first glance, the Asus ROG Phone 6 Pro appears to offer pretty heavily-altered software, but dig a little deeper and you’ll find that it’s generally pretty clean and scaled-back. There are certainly some software tweaks, but most of them are there to help you get the most out of the phone, and not advertise or encourage you to use unwanted apps. When you first set the phone up, you can choose between Asus’ skinning, or a more subtle look, too. I decided to go all in with the flashy, gamer aesthetic.

Added software include the Armory Crate, which is where you’ll switch between modes. The Armory Crate is divided into a few different tabs, but perhaps the most important is the “Console,” which offers a range of different settings to dive into. Here, you can switch between X Mode, Dynamic, or Ultra Durable. X Mode prioritizes display and system performance, while Ultra Durable puts battery front and center. Dynamic aims to strike a balance between the two.

You can also tweak how the phone performs, and the different controls, on a game-by-game basis. That can feel like a lot of work at times, so some will prefer to keep things at default settings.

As mentioned, the ROG Phone 6 Pro works with a few optional accessories. These cost extra.

My favorite is the Asus Kunai 3 controller, which makes the device look more like a portable gaming machine than a smartphone. This controller can be used separate from the device, or attached to the phone with a case, and it makes a huge difference. The buttons feel great, and the joystick works well too.

The other accessory is the AeroActive Cooler 6, which is built to help cool your phone. It’s a bit bulky, but it has four physical buttons on the back. I didn’t love using it, but others may want it.

The Asus ROG Phone 6 Pro is quite a device. While not everyone will want or care about a phone made for gaming, those that do should seriously consider the ROG Phone 6 Pro. It performs like a beast, offers some cool accessories, and boasts a software experience that’s scaled-back when you want it to be.

Not everyone needs the Pro model of the device though — and frankly, most should stick with the non-Pro device. You really don’t need a display on the back for gamer-style graphics.

Much of the competition for this phone comes from the likes of Black Shark, with the new Black Shark 5. Generally, the ROG Phone 6 is a better device, considering the better specs, and comes at a similar price if you don’t buy the Pro variant.

Should I buy the Asus ROG Phone 6 Pro?

Yes, but consider buying the standard ROG Phone 6 instead of the Pro.

The Asus ROG Phone 6 Pro builds on last-generation with incredible performance and a good software experience.