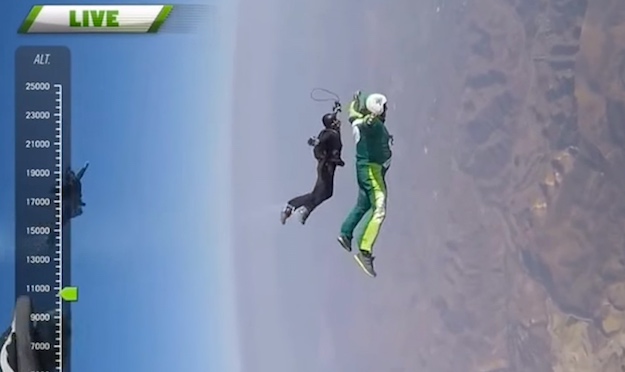 Over the weekend, veteran skydiver Luke Aikins set out to complete a stunt that gives new meaning to the phrase insanity. With thousands of jumps under his belt (18,000+ to be specific), Aikins, always searching for that next and bigger high, decided it’d be a good idea to jump out of an airplane traveling at 25,000 feet, maneuver himself through the air at terminal velocity, and then, if all went according to plan, fall gracefully onto a huge 10,000 square foot net, about 1/3 the size of an NFL field. And to top it all of, the entire production aired on FOX, albeit with a delay just in case anything went wrong.

After reaching 25,000 feet, Aikins lept out of a perfectly fine airplane and began his descent into the cauldron that is the California desert. As you’ll see in the video below, Aikins was accompanied by a handful of assistants who, equipped with GPS units, effectively guided or boxed Aikins in just to make sure his trajectory didn’t fall too far off course.

“He aimed for the center of the net,” The New York Times writes, “guided by GPS and lights. Seconds before impact, he flipped onto his back and landed safely in the California desert. He lay cocooned in the net for a few moments, hands over his face. Then he clambered out, into the arms of his wife, Monica, with whom he has a 4-year-old son.”

Following his historic fall and jaw-dropping landing onto a ginormous net, Aikins was at a loss for words.

“I’m almost levitating. It’s incredible, this thing that just happened,” Aikins excitedly said. “The words I want to say, I can’t even get out of my mouth.”

The entire stunt was two years in the making and is perhaps one of the craziest videos we’ve ever seen. All the more impressive is that Aikins jumped from a height of 25,000 feet: typically, most skydivers jump from a height of anywhere between 10,000 and 13,000 feet.

Video of Aikins detailing the mechanics and logistics of his jump can be seen below.